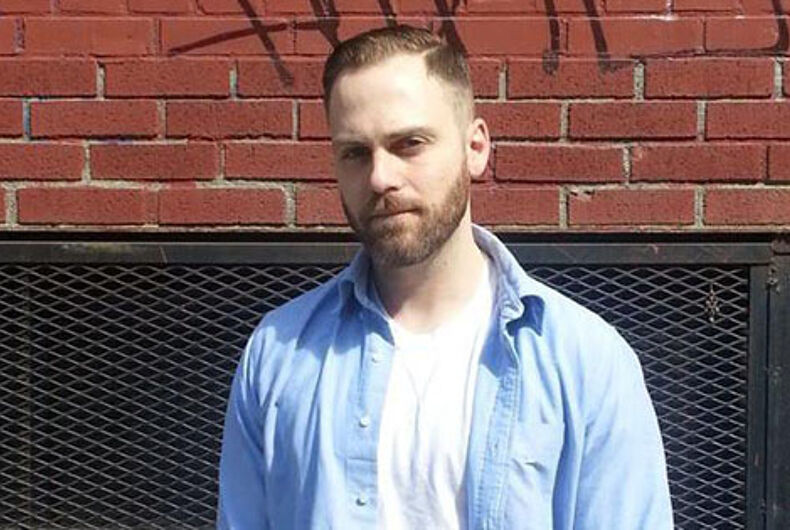 Chadwick Moore, the openly gay writer who wrote a fluffy, softball profile of racist, misogynist, transphobe Milo Yiannopoulos last year for a magazine aimed at LGBTQ readers, has joined Milo on the other side. He’s come out as a right winger in an op-ed in the New York Post.

“I finally had to admit to myself that I am closer to the right than where the left is today. And, yes, just three months ago, I voted for Hillary Clinton.”

Moore said in his op-ed that while he supported stronger immigration enforcement he was against the wall President Trump is intent on building along Mexico’s border with the United States.

“I imagine he’s not going to agree with every conservative position at this time,” said Gregory Angelo, president of the Log Cabin Republicans. “We welcome anyone who would support Ronald Reagan’s 80/20 rule.”

That “rule” harkens back to a quote by the president who stood in the way of properly addressing the AIDS crisis when it first emerged: “The person who agrees with you 80 percent of the time is a friend and an ally – not a 20 percent traitor.”

“I feel far more welcome as a gay man in Republican circles than I ever do as a Republican in gay circles,” Angelo told LGBTQ Nation in a phone interview Monday.

Moore’s switch to conservative, the writer claims, came as a result of the backlash he received for writing that flattering profile of the openly gay Breitbart editor. People he called friends turned their backs to him. People told him he was a Nazi, a monster, and those friends suddenly started avoiding him like the plague, he wrote.

“I felt awful — but not so awful that I would keep opinions to myself.

“And I began to realize that maybe my opinions just didn’t fit in with the liberal status quo, which seems to mean that you must absolutely hate Trump, his supporters and everything they believe. If you dare not to protest or boycott Trump, you are a traitor.

“If you dare to question liberal stances or make an effort toward understanding why conservatives think the way they do, you are a traitor.

“It can seem like liberals are actually against free speech if it fails to conform with the way they think. And I don’t want to be a part of that club anymore.”

Angelo told LGBTQ Nation he wasn’t surprised at how Moore was treated. “I have seen more people defriended unfriended and exiled by liberals over the last three months than I ever have in my career,” he said.

Not surprisingly, Breitbart picked up the op-ed and reported on it. Although Yiannopoulos is banned from Twitter for life — for harassing actress Leslie Jones — he does have a profile on Facebook and as of press time he has not made a comment, nor responded to a request for one from LGBTQ Nation.

In his original creampuff profile, Moore concluded with a quote from the hatemonger that he sees himself as “the canary in the coalmine,” and a prophetic statement that, given Moore’s “coming out” as a conservative, might shed new light on his own political point of view.

“I am one of the primary engines of change in American culture because I’m demonstrating that someone sassy and silly and gay and flamboyant who loves RuPaul’s Drag Race and sucks black dick doesn’t have to vote Democrat,” Yiannopoulos told Moore. “That matters. That’s really important.”

Moore addressed his smoochy profile in a tweet early Monday.

Since the news came out, Moore has been tweeting that he’s received an outpouring of support.

One note was from a parent of a conservative gay man, who said he was scared to come out as anything but liberal.

And part of his new outlook appears to be the bashing of the industry for which he earns his living.

Moore apologized for his liberal past to transphobe and far right pundit Ann Coulter and gave a shoutout to anti-progressive, transgender YouTube sensation and arch conservative Blaire White.