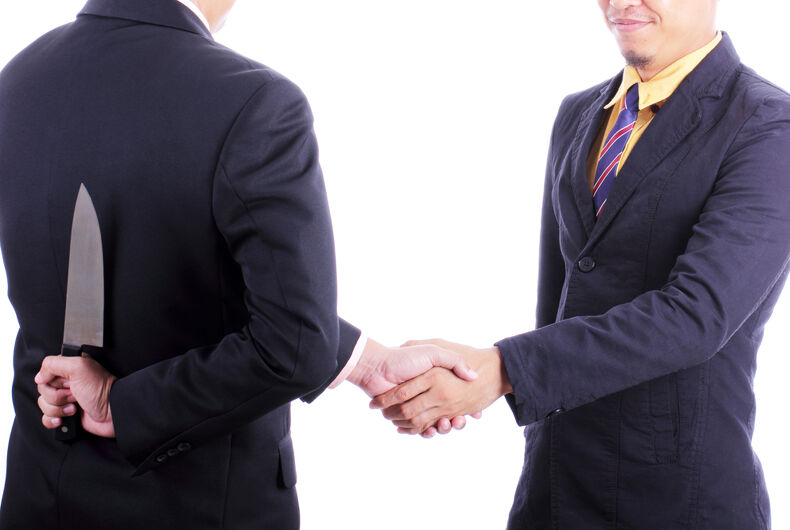 The Washington Examiner published an article yesterday about the Log Cabin Republicans and their access to the Trump administration. Leaders of the group patted themselves on the back and praised Trump in the piece headlined, “Trump welcomes in Republican LGBT advocates.”

Long an outcast in their own party, Log Cabin Republicans, the nation’s leading center-right LGBT advocacy group, is being welcomed by Team Trump, and Republicans as a result.

And with the bulk of bigger, better financed but liberal LGBT groups being held at arm’s length because of their attacks on President Trump and Republicans, Log Cabin has suddenly become a main driver of key gay and transgender civil rights in Washington.

“It really does hold Log Cabin to be that choice for the entire LGBT community,” said newly installed Chairman Sarah Longwell. “We’re the only ones who are going to be making sure that Republicans get better every day on our issues,” she added.
…
“At best, Trump is a quiet ally,” [President Gregory T.] Angelo said. “He’s certainly a ‘do no harm’ guy,” he added of Trump, the first ever Republican presidential nominee to promote gay rights at his nominating convention.

Now that Trump has tweeted that he plans to ban transgender people from the military, suddenly the group is changing their tune. Slightly. Via press release:

This smacks of politics, pure and simple. The United States military already includes transgender individuals who protect our freedom day in and day out. Excommunicating transgender soldiers only weakens our readiness; it doesn’t strengthen it. The president’s statement this morning does a disservice to transgender military personnel and reintroduces the same hurtful stereotypes conjured when openly gay men and women were barred from service during the military’s ‘Don’t Ask, Don’t Tell’ era. As an organization that led the charge against that hateful policy, Log Cabin Republicans remains equally committed to standing up for transgender military personnel who put their lives on the line to keep us free.

As with John McCain, who roused himself from a taxpayer paid hospital bed after cancer surgery to vote in favor of a scheme to take away health insurance from millions of Americans, the hypocrisy is overwhelming. If you lie down with dogs, you get up with fleas.