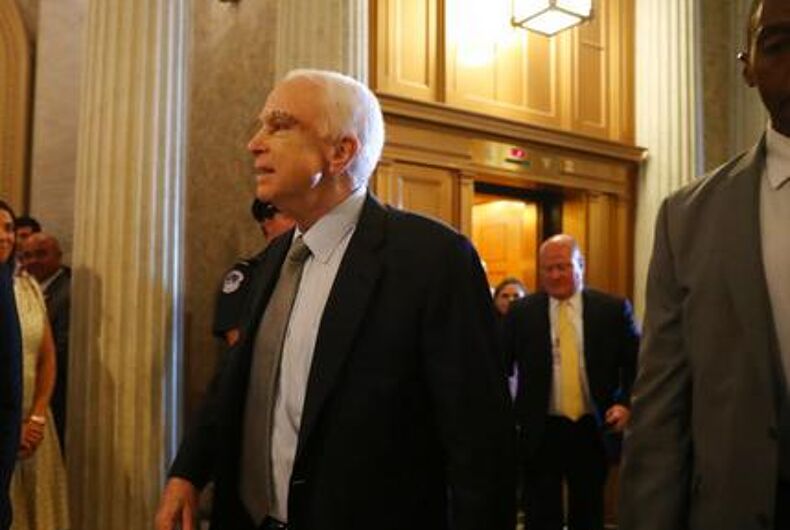 Sen. John McCain, R-Ariz. arrives on Capitol Hill in Washington, Tuesday, July 25, 2017, as the Senate was to vote on moving head on health care with the goal of erasing much of Barack Obama's law. Photo: AP Photo/Andrew Harnik

The Senate has voted to move ahead on health care legislation aimed at dismantling the Obama health law.

The vote was 51-50 on Tuesday, a victory for Majority Leader Mitch McConnell and President Donald Trump. Last week, McConnell was forced to postpone the vote, lacking the support of conservatives and moderates.

In a dramatic turn, Sen. John McCain returned from Arizona where he is battling brain cancer to cast a crucial vote on proceeding on health care.

He received a standing ovation from his colleagues on the Senate floor.

Senator John McCain receives standing ovation as he returns to the Senate to vote for health care bill. https://t.co/AeWsEBOK2V

The vote sets up days of debate and votes on repealing and replacing Barack Obama’s health care law. Whatever the Senate approves still requires a vote in the House.

Shouting “Kill the bill” and “shame,” the demonstrators stood in the visitors’ gallery and chanted. They were led out of the chamber by police but could still be heard.

The vote got underway on moving head on health care with the goal of erasing much of Barack Obama’s law. The Senate chamber was packed, with lawmakers standing to cast their votes.

Trump praises the Senate for the vote

He says a vote Tuesday to take up the Republican health care bill “was a big step.”

Trump is also thanking Arizona Sen. John McCain, who returned to Washington his brain cancer diagnosis, to cast a vote.

Trump adds that he wants “to congratulate the American people” because better health care is on the way.

.@SenJohnMcCain-Thank you for coming to D.C. for such a vital vote. Congrats to all Rep. We can now deliver grt healthcare to all Americans!

Watch McCain speaking on the Senate floor below.