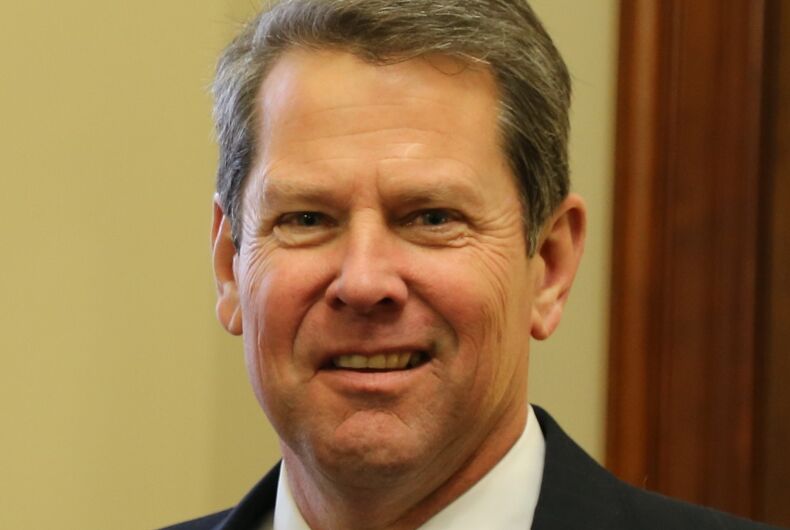 Last week, Kemp won the Republican primary for governor of Georgia. Immediately after, he reiterated his support for undermining antidiscrimination legislation with religious exemptions.

And last month, he called the Supreme Court ruling in the Masterpiece Cakeshop case a win against the “radical left and politically correct.”

I applaud today’s decision by #SCOTUS. As governor, I’ll stand up to the radical left and politically correct. We will never apologize for protecting religious liberty and living out our faith. #gapol #maga #tcot #gagop #gafirst

That didn’t stop the George LCR from endorsing Kemp, making him the first gubernatorial candidate that the organization has endorsed in its history.

“He is a small business owner who wants to put Georgians first and not pit them against each other. Kemp will continue the amazing legacy of Gov. Deal by creating jobs and making Georgia a great place to start businesses.

Democratic nominee Stacey Abrams has a long record of supporting LGBTQ equality, going back to her time as a student at Spelman College.

But the Georgia LCR said that supporting equality is actually a way to “exploit” LGBTQ voters.

“Meanwhile, Stacey Abrams is supported by out-of-state liberals and socialists,” the statement said. “The Democratic Party seeks only to exploit the LGBT community by putting identity politics over the real needs of Georgians. Republicans across the state are ready to stand firm and united to help Brian Kemp win in November.”

The Georgia LCR’s website says that the organization is for “Republicans who support fairness, freedom, and equality for gay and lesbian Americans.”

The “News” section of their website, though, shows that the organization is far more concerned with advancing Republican politics than it is with advancing LGBTQ equality.

Ginsburg says she plans to stay on the Supreme Court for 5 more years.