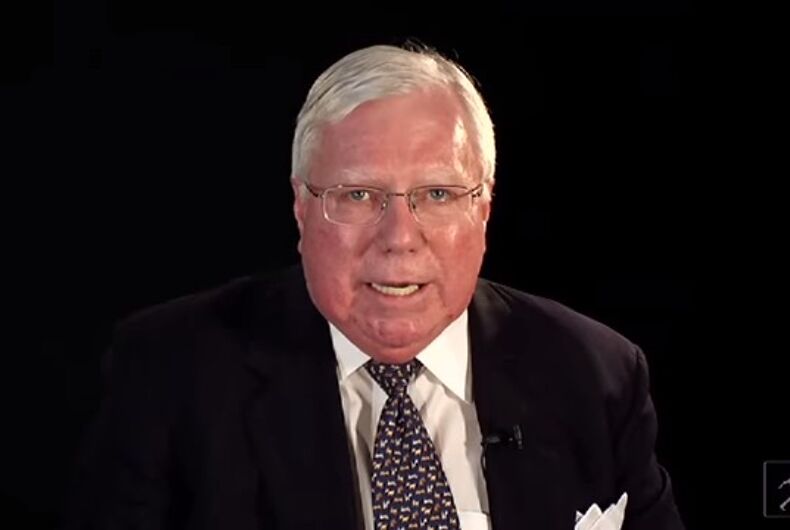 Unlike tweet-happy President Trump, Special Counsel Robert Mueller doesn’t feel the need to broadcast his every move. But he’s made it clear that his next target is far-right conspiracy theorist Jerome Corsi, the man best known for insisting that President Obama is gay.

Corsi admitted that he’s facing criminal charges of perjury by publicly proclaiming that he refused to take the offer of a plea deal. At issue is Corsi’s alleged involvement with Wikileaks and its release of hacked emails from the Clinton campaign in 2016. Corsi insisted Monday that he didn’t have any inside information. He’s just really, really smart.

“I connect the dots,” Corsi said in an interview on a right-wing network. “I didn’t need any source to tell me.”

Instead, he insisted he conducted a “forensic analysis” of 1,000 pages of info about the Democratic computer systems and concluded that the emails would be coming in October just in time to turn the campaign narrative upside down.

Unfortunately for Corsi, that’s not what his own emails say. On Tuesday, NBC got hold of a draft document that Mueller is preparing that includes Corsi’s correspondence with Roger Stone, a political operative best known for his dirty tricks dating back to the Nixon era.

“Word is friend in embassy plans 2 more dumps,” Corsi wrote on Aug. 2, 2016, referring to WikiLeaks founder Julian Assange. “One shortly after I’m back. 2nd in Oct. Impact planned to be very damaging.”

So much for Corsi’s intuitive brilliance.

Corsi had denied ever having contact with Assange or Wikileaks. Just to be sure, he apparently scrubbed his computer in early 2017, as attention on Russian interference in the 2016 campaign began to heat up.

Corsi is the type of fringe figure that the Trump campaign attracted, like flies to honey (or something else). One of his main claims to fame was his insistence that Barack Obama was a gay Muslim.

Corsi insisted that a highly reputable source named “Carolyn” told him that Obama joined Rev. Jeremiah Wright’s church to hook up with men as part of what Corsi called the Down Low Club. Corsi also claimed that Obama was once married to another man, a roommate who was (in a nice conspiratorial touch) Pakistani.

Corsi has been smearing Democrats for years. He was a promoter of the Swift Boat lies about John Kerry in 2004 and also spread lies about Obama’s birth certificate. More recently, as a “correspondent” for Alex Jones’ InfoWars empire, Corsi has been claiming that Pope Francis is “OK with homosexuality and does not seem to be offended by the pedophilia agenda, which is the next horizon for the LGBT.”

A lot of Corsi’s nuttiness is memorialized in the books he keeps churning out from such reputable publishers as Simon & Schuster.

The significance of Corsi’s email exchanges with Stone is that it could establish a clear link between the Trump campaign and Russian efforts to influence the U.S. elections.

In case anyone has been worn down by Trump’s continued insistence that the Mueller investigation is a witch hunt, accepting help from a foreign entity during a campaign is illegal, whether it’s financial or, in this case, in-kind. There’s also that small matter of wrecking the integrity of the election system.

Corsi may be betting, as Stone and Trump’s former campaign manager Paul Manafort seem to be, that a presidential pardon will cure him of his problem. For a man who built his reputation as a conspiracy monger, it would be quite the irony if Corsi was indeed at the very center of one of the biggest—and most damaging–conspiracies in American history.

He just wanted to relax, but his massage therapist sexually abused him instead