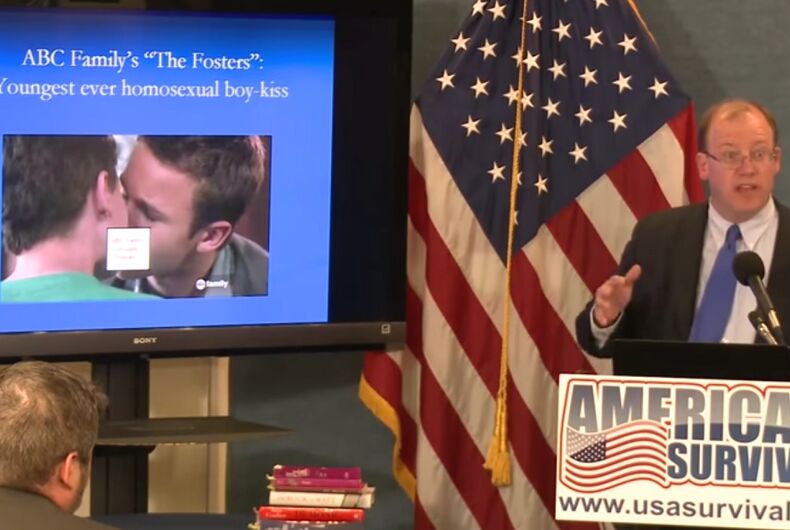 Facebook unpublished the page for Peter LaBarbera’s Americans for Truth about Homosexuality (AFTAH) over the weekend, citing hate speech.

The page was taken down over the weekend, according to LaBarbera, who posted a screenshot on Twitter.

Yesterday the cowardly yet proficient anti-#conservatives at @Facebook took down ("unpublished") AFTAH's FB page, citing violations of their (spurious) #hate standards. We are appealing: pic.twitter.com/ptWsYOroYe

LaBarbera responded that he doesn’t hate gay people, he is just a “moral opponent” of gay people.

“Of course, the ‘hate’ charge is spurious and effectively precludes all MORAL opponents of homosexuality from using [Facebook],” he told LifeSiteNews, a Christian conservative website.

“AFTAH, a Christian educational organization, has from its inception condemned real hatred and violence against homosexuals (or anyone).”

“We have long denounced groups like Westboro Baptist Church with its preposterous ‘God Hates Fags’ message,” LaBarbera added, as if the existence of someone even more hateful than himself means that he’s not hateful.

AFTAH is an anti-LGBTQ hate group founded by LaBarbera over 20 years ago, “dedicated to exposing the homosexual activist agenda,” according to its website. The group’s “About” page doesn’t mention any officers or members other than LaBarbera.

He has a long history of hateful statements about LGBTQ people.

A few years ago, he invited a guest on his radio show who explained how Christian conservatives need to “re-horrify” Americans about LGBTQ people in order to fight increasing tolerance. He has said that his goal is to “re-stigmatize” gay people.

In order to “re-stigmatize” LGBTQ people, LaBarbera’s main tactic has been to link gay men and pedophilia. He also refers to marriage equality as “tyranny” and, in 2018, is still promoting conversion therapy.

Several years ago, he said that he is “reassured” when LGBTQ people are the victims of STI’s and violence.