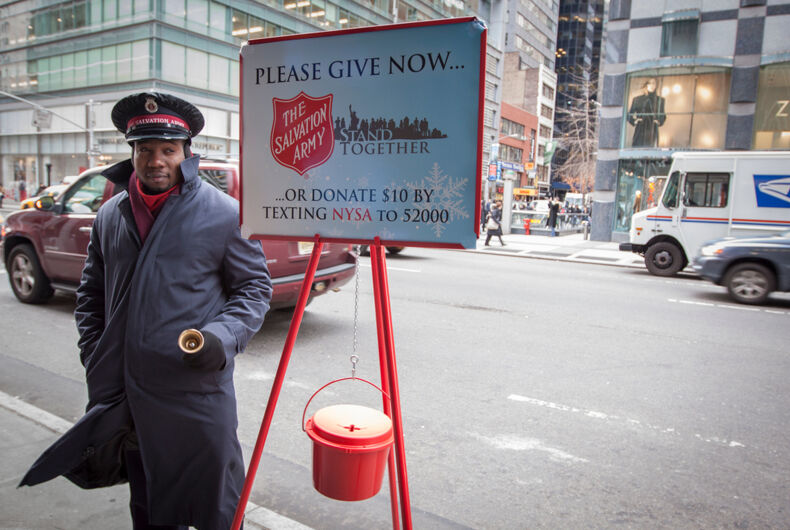 “If you run into a Salvation Army bell ringer this Christmas season, don’t strike up a conversation about President Trump or gay marriage,” warns FOX News host Todd Starnes is telling his audience.

Starnes says employees “have been told to stop posting their opinions about gay marriage, abortion or anything political on social media because it might reflect poorly on the organization.”

The far right pundit says he has leaked copies of internal memos from the home office to staffers instructing them to keep mum about controversial topics.

Related: Salvation Army opens LGBT specific homeless shelter, but you should be dubious

“Political or social opinions (such as hot topic issues like LGBTQ Marriage, Officer Housing, or Abortion) should not be included in profiles, and officers should refrain from posting anything that expresses a political view,” the guidelines for Salvation Army officers state according to Starnes.

“This is a threat to our reputation, our fundraising efforts, and ultimately our ability to serve people in need,” read an email to staffers.

Of course, Starnes’ report has the religious right up in arms with his report. Not because the group is trying to brush their anti-LGBTQ history under the rug and protect their fundraising, but because they won’t talk about “sexual sin” in front of the red kettles.

The Army has pussyfooted around the issue because while their anti-LGBTQ history has potentially cost them millions in donations over the past decade as queer folk and allies boycott the red kettles, they also don’t want the religious right leading a boycott of them for being too LGBTQ-friendly.

Until the Salvation Army takes a public stand once and for all on whether or not they support LGBTQ people with more than words, the whiplash between the religious right and civil rights activists will continue.

As their savior told his followers, “No one can serve two masters. Either you will hate the one and love the other, or you will be devoted to the one and despise the other. You cannot serve both God and money.”

Salvation Army folds like a cheap Bedouin tent in a stiff desert breeze. Army slaps gag order on any talk about sodomy-based marriage or abortion. You can talk about the "love of Jesus" as long has nothing to do with sexual sin or protecting unborn babies. https://t.co/IQd9VFiYk0