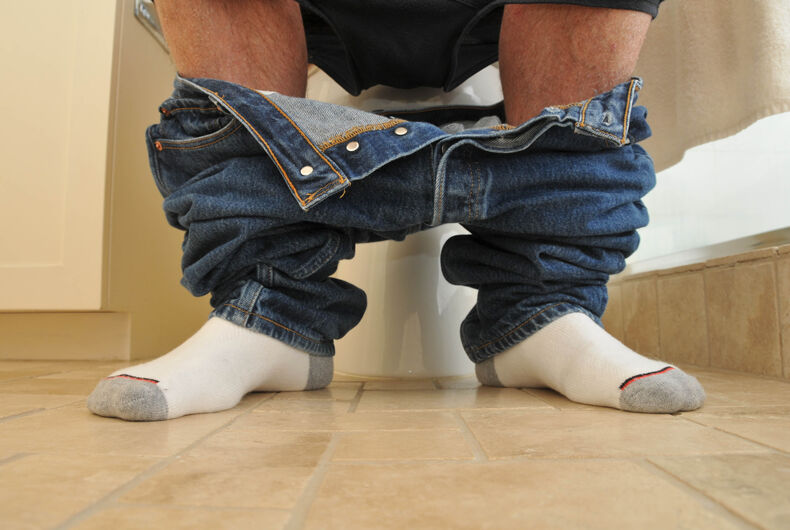 Acting Attorney General Matthew Whitaker isn’t just a certified Trump sycophant willing to spike the Mueller probe. The former US Attorney led a witch hunt against a gay Iowa legislator based on flimsy evidence and Whitaker’s bias against LGBTQ people.

But despite Trump’s assurances about how great Whitaker is (before claiming he doesn’t know him), Whitaker’s shady dealings with a company that was shut down for defrauding customers out of millions of dollars is now coming to light.

World Patent Marketing promoted a “masculine toilet” meant for men who are so well endowed their junk dangles in the water. It also marketed money for time travelers and Sasquatch dolls.

“The average male genitalia is between 5″ and 6″,” a press release said. “However, this invention is designed for those of us who measure longer than that.”

Related: Trump fired Jeff Sessions. His replacement will be even worse for LGBTQ rights.

The average American male penis is approximately 5″ when erect. Flaccid penises average around 3.5″ according to scientists.

In the same press release, the firm announced the appointment of “Matthew G. Whitaker, former Iowa US Attorney and Republican candidate for United States Senate to the company’s advisory board.”

World Patent Marketing bilked would-be inventors out of large fees to help them patent and promote their products. The company was shut down by the federal government and fined $26 million.

Whitaker regularly defended the company against accusations of fraud, threatened customers who complained, solicited new business, and appeared in promotional material for the company.

World Patent Marketing is still under investigation by the FBI. Whitaker’s new position as Acting Attorney General would give him authority over the investigation and the ability to squash it – just like the Mueller probe.

“As a former US Attorney, I would only align myself with a first class organization,” he said before the company was shut down but after allegations of fraud had surfaced. “World Patent Marketing goes beyond making statements about doing business ‘ethically’ and translate[s] those words into action.”

Whitaker has refused to comply with a subpoena seeking documents about the company. He has also refused to repay the money he made from the company. The other advisory board members complied, but none of them were as involved with the company as Whitaker.

Why has a ‘No Gays Allowed’ billboard gone up in Times Square?