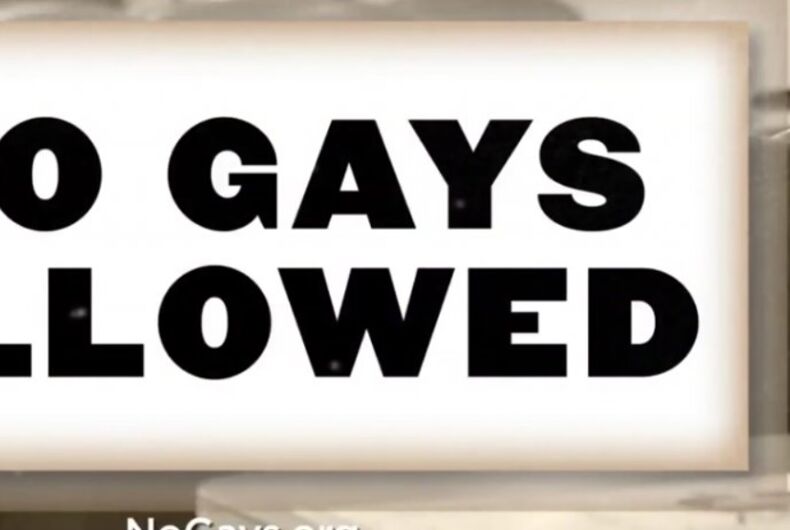 A billboard that says “NO GAYS ALLOWED” was put up in Times Square in New York City.

The sign is part of a campaign by a group called Citizens for Transparency to shed light on the Alliance Defending Freedom (ADF), a hate group that has been behind several recent legal campaigns to limit protections for LGBTQ people.

The billboard directs people to NoGays.org, a website that gives information about ADF’s agenda, which includes fighting anti-discrimination laws, supporting conversion therapy, and promoting the myth that allowing transgender people to use the appropriate restroom will lead to violence against women.

Alliance Defending Freedom is perhaps best known for their work in Masterpiece Cakeshop, but they have also been involved in numerous other cases, always on the side of limiting LGBTQ protections and equality. They have even gone so far as to defend a homeless shelter that wanted a religious exemption to turn away transgender people.

“We want to remind people that there are still really insidious forces at work against our community,” said Caleb Cade, a spokesperson for Citizens for Transparency.

“ADF has been leading that war for a long time, with tens of millions of dollars to do it.”

“ADF is not litigating any cases, pursuing any legislation, nor supporting the passage of any laws domestically or internationally that criminalize sodomy,” Tedesco said.

The Southern Poverty Law Center, though, says that ADF has in fact supported sodomy laws, in Jamaica, Belize, and the U.S.

ADF submitted a brief in favor of sodomy laws in Lawrence v. Texas, the Supreme Court case that ultimately nullified the anti-gay laws in the U.S.

“There is no fundamental right ‘deeply rooted in this Nation’s history and traditions’ to engage in same-sex sodomy,” the brief said.