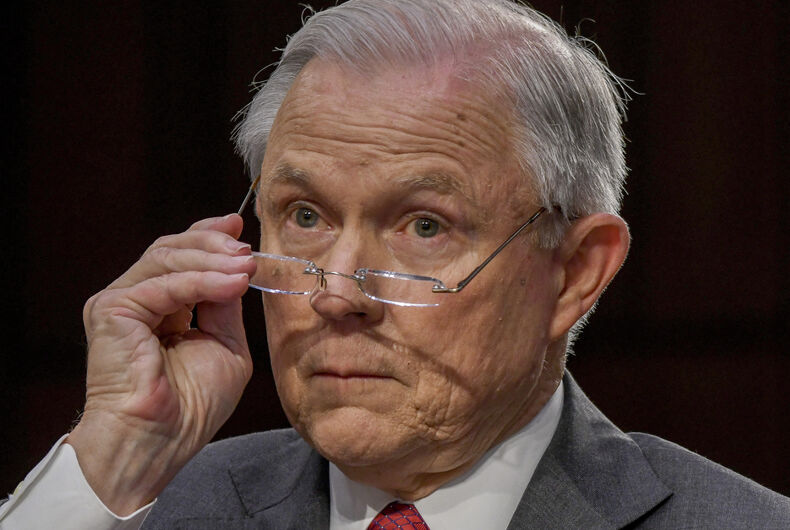 Whitaker will take over the department – and special counsel Robert Mueller’s Russia investigation. Rosenstein, a regular target of Trump’s ire, would no longer be in charge of the investigation.

He is also a conservative Christian with a long history of anti-LGBTQ bias. While Sessions used the Department of Justice to attack LGBTQ rights nonstop, Whitaker will likely take it to the next level.

Whitaker launched his political career in Iowa in 2002, campaigning for state treasurer. He also ran unsuccessfully for the GOP nomination to the Senate in 2014. In that campaign, Whitaker billed himself as “a Christian who regularly attends church with his family.”

As might be expected from that description, Whitaker has an affinity for the religious right.  “I have a Christian worldview,” he said during his 2014 campaign. “Our rights come from our Creator and they are guaranteed by the Constitution.”

That includes a Christian-right view of the law. Whitaker has said that judges should be “people of faith” who “had a biblical view of justice.”

In case you were wondering how Whitaker would apply that view, there’s ample evidence. From 2004 to 2009, he was a U.S. Attorney in Iowa. In that role, Whitaker targeted Matt McCoy, the state’s first out gay legislator.

Whitaker brought extortion charges against McCoy, claiming that McCoy threatened a company with loss of Medicaid contracts if it didn’t pay him.

“There’s no allegation that he would have been successful or had any sway with the state Medicaid office,” Whitaker said. “It’s merely the threat that was made.”

McCoy denied the charges, saying that the company owed him $2,000 for a business deal that went sour.

The jury agreed with McCoy – and quickly. It took only two hours for jurors to reach a not guilty verdict, and that included the time the jurors took for lunch. McCoy still serves in the Iowa legislature.

The case against McCoy was transparently flimsy. It didn’t help that Whitaker’s office insisted that the main witnesses for the prosecution wasn’t on the government payroll, only to have to admit that he was.

Whitaker also espouses exactly the kind of views that Trump embraces. He called for a special prosecutor to look into the controversy about Hillary Clinton’s email server and he said that Trump made the “right decision” to fire Comey.

Whitaker has publicly stated that the Russia investigation has “gone too far” and is widely expected to kill it to protect Trump.

….We thank Attorney General Jeff Sessions for his service, and wish him well! A permanent replacement will be nominated at a later date.

But the dismissal of the nation’s top law enforcement official shouldn’t be based on political motives. https://t.co/uAeQnKinki

What does last night’s election mean for the trans community?