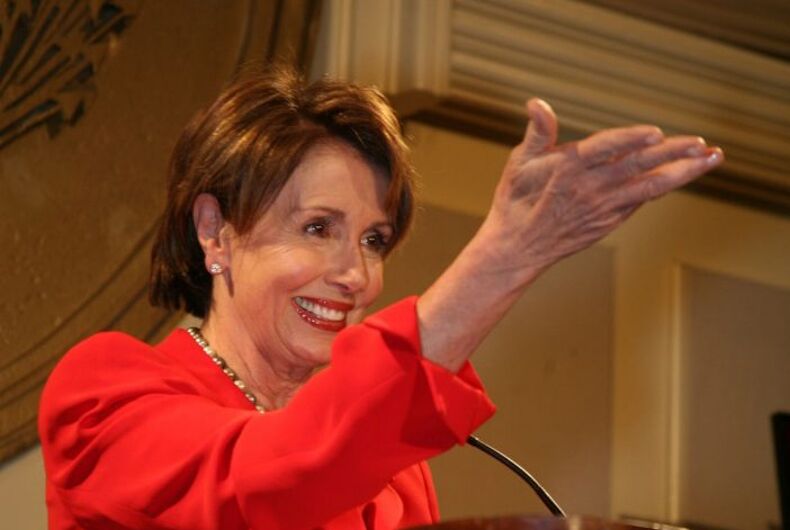 House Minority Leader Nancy Pelosi (D-CA) said that the Equality Act would be a top priority if Democrats retake the House next month.

“It isn’t in our ‘For The People’ agenda because it doesn’t get that specific, but there’s one more because it’s personal for me that I really want to do, and it’s called the Equality Act,” Pelosi said at an event on Tuesday.

“The Equality Act expands ending discrimination against LGBTQ people and women and adding that to the Civil Rights Act.”

If passed, the Equality Act would ban discrimination against women and LGBTQ people in employment, housing, education, and several other areas at the federal level.

Democrats introduced the bill in Congress in 2015, and it even got support from then-President Barack Obama. In 2016, both Hillary Clinton and Bernie Sanders said they supported it.

Related: Nancy Pelosi will be a guest judge on ‘RuPaul’s Drag Race: All Stars’

Democrats introduced the bill again in 2017 in both the House and Senate.

A spokesperson for Pelosi said that the bill would be one of the first ten that a Democratic House will consider.

“In the House, the majority will signal a piece of legislation is a top priority by assigning it a bill number between 1 and 10,” the spokesperson said. “Leader Pelosi has decided the Equality Act will get one of these priority bill numbers, indicating its importance to House Democrats.”

Senate Minority Leader Chuck Schumer (D-NY) has not commented on the Equality Act. Even if the Democrats retake the Senate, the bill would be harder to pass there because of Senate rules.

Also, the Trump Administration has been hostile to LGBTQ anti-discrimination legislation, so the Equality Act is not likely to become law in the next Congress.

Still, LGBTQ advocates took Pelosi’s announcement as an opportunity to stress the importance of the bill.

“Discrimination is a real and persistent problem for far too many LGBTQ Americans, and more than 50 percent of LGBTQ Americans live in states that lack LGBTQ-inclusive statewide protections,” said HRC’s Stephen Peters.

Is Trump about to name Michele Bachmann the next UN ambassador?