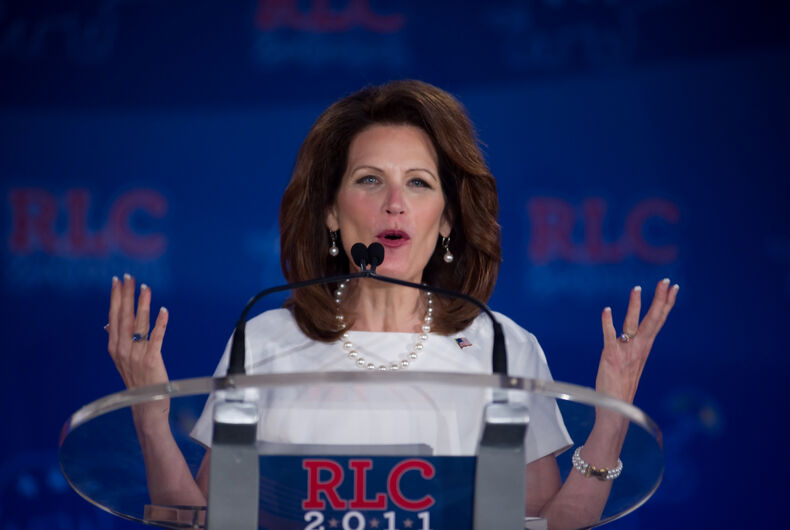 Is Donald Trump considering appointing former Republican Congresswoman and failed presidential candidate Michele Bachmann as the new United Nations ambassador? If the religious right has their way, he will.

Former UN ambassador Nikki Haley abruptly resigned shortly after ethics complaints were lodged against her. Her resignation means the alleged violations will never be investigated.

So, of course, modern-day evangelical leaders are pushing her forward.

Related: Michele Bachmann asked God if she should run for Senate. He wasn’t on board.

“I actually was with Nikki Haley and interviewed before her announcement that she was going to be stepping down. She did a great job, I was impressed with what she did,” Tony Perkins, the head of the Christian hate group Family Research Council said on the Truth & Liberty Coalition webcast with “historian” David Barton who has been debunked repeatedly for his wild claims based in nonsense.

“I actually think that Michele Bachmann would make a great replacement for her at the United Nations,” Perkins continued. “Michele, a former Congresswoman from Minnesota, a member of the House Intelligence Committee, ran for president. And is actually at the United Nations now, kind of leading a prayer ministry there. She’s tough, she’s intelligent. I think she would be a good choice for the president and I’ve kind of floated her name a little bit.”

Dykes on Bikes: A moment on a motorcycle turned into a pride tradition