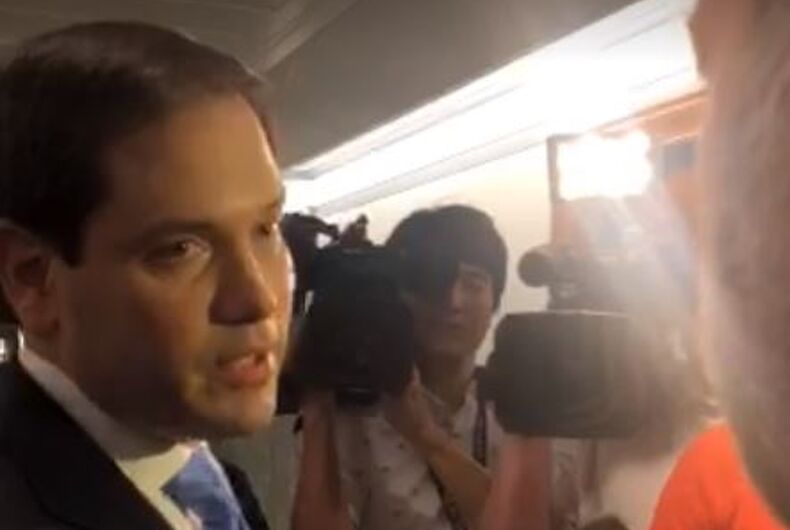 Marco Rubio calls Alex Jones a "clown" during altercation at the Capitol.

Republican Senator Marco Rubio was accosted at the Capitol yesterday by InfoWars host Alex Jones. The two nearly started a physical altercation outside of a hearing on Silicon Valley’s role in aiding potential foreign influence on U.S. elections.

The incident began after the GOP senator from Florida ridiculed Twitter CEO Jack Dorsey – and other tech companies – for working with what he called “authoritarian” governments in order to silence conservative voices on social media.

Rubio stood in front of reporters to answer questions when Jones began interrupting his interviews. It was at that point that Jones appeared to reach out toward Rubio.

“Well, sure, I just patted you nicely,” Jones responded.

“Oh, you’ll beat me up. Look at him he’s so mad,” Jones replied. “You’re not going to silence me. You’re not gonna silence America. You are a little gangster thug. Rubio just threatened to physically take care of me.”

When Rubio began to exit the scene, he reportedly told the journalists, “You guys can talk to this clown.”

NBC reported that Jones said, “Look at this little frat boy, he’s so cool. Go back to your bathhouse. There goes Rubio, little punk.”

Jones has a history of spouting off anti-LGBTQ crackpot ideas, such as the belief that lesbians eat other people’s brains and gay men are deliberately infecting each other with HIV as part of a “Satanic” plot.

“The reason you have HIV is because it is a culture now in the gay community…to give other people HIV,” Jones once said.

2 new HIV medications were just approved by the FDA

After years of child abuse scandals, can the Catholic Church be saved?