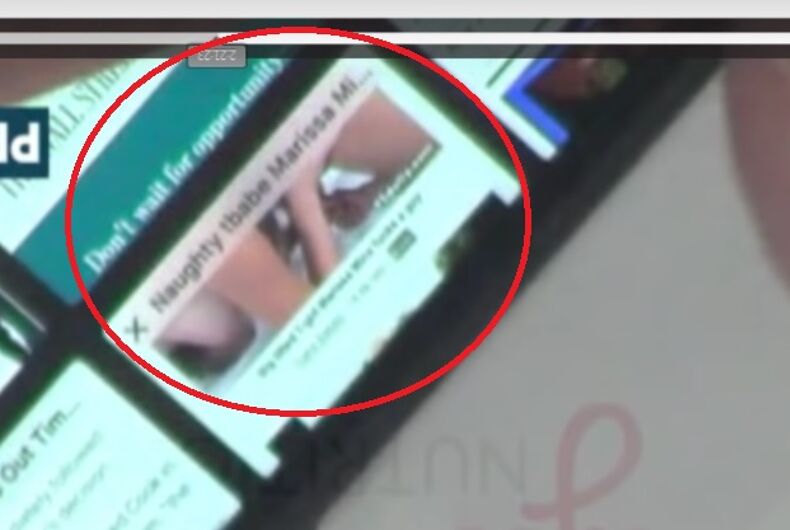 InfoWars host and anti-transgender commentator Alex Jones inadvertently showed a bit of his browser history on his show, revealing that he has watched an adult video involving a transgender actress.

Jones has a history of anti-transgender comments and repeatedly uses the word “tranny” to describe trans women.

While promoting his brand of nutritional supplements – which are just multivitamins with an enormous mark-up – a camera zoomed in on Jones’s phone.

He showed viewers how to access the site to buy the supplements, and then closed the page, revealing several of the last few websites he has visited.

One of them has the title “Naughty tbabe Marissa Mi-,” which appears to be a video starring Marissa Minx, a pornographic actress who is transgender.

He said that Michelle Obama is a trans woman and that she killed Joan Rivers as part of a cover-up. He said that trans women are gay men who “want to go get breast implants and doll your hair up.”

Minx, who describes herself as “Australia’s #1 Trans Companion/XXXAdult Model,” has retweeted a few tweets about Jones since learning that he’s a fan, but she has not commented on him.

Although I think I speak for all of us when I say, go fuck yourself Alex. We're not interested! pic.twitter.com/4cbDVfuehr

Earlier this month, his videos were removed from Facebook, Apple, YouTube, and Spotify. In a statement, Facebook specifically cited Jones’s hate speech about transgender people as a reason for banning him.

“More content from the same Pages has been reported to us — upon review, we have taken it down for glorifying violence, which violates our graphic violence policy, and using dehumanizing language to describe people who are transgender, Muslims and immigrants, which violates our hate speech policies,” the statement read.