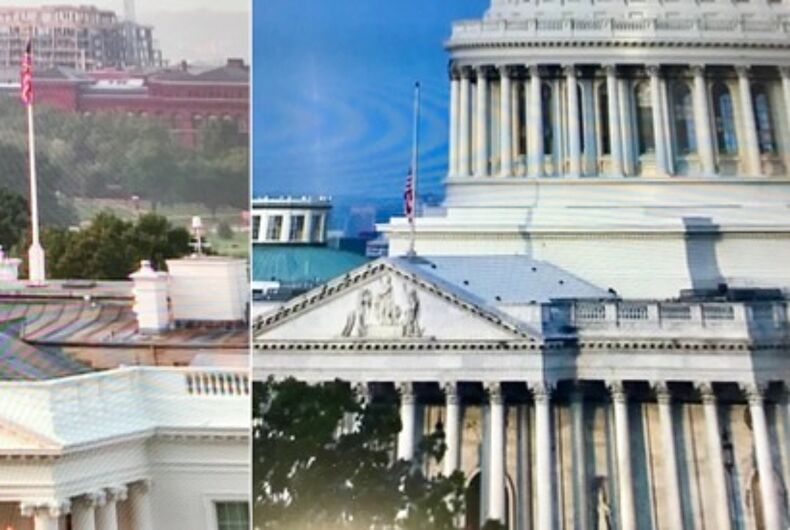 While the White House has moved the American flag back to full-staff in an insult to deceased Senator John McCain, the Capitol continues to fly the flag at half-staff.Photo: Screenshot

John McCain did not like Donald Trump. The feeling was mutual.

The two have had several public spats and, of course, Trump hasn’t held back with his insults.

On the campaign trail, Trump dismissed McCain’s heroism during the Vietnam War after his plane was shot down and he was captured, imprisoned and tortured. McCain, for his part, killed Trump’s plan to repeal the Affordable Care Act. As McCain died of cancer, he made it clear that Trump was not invited to his funeral.

When McCain died, Trump’s couldn’t resist being bitter until the end. Instead of putting out a pre-written White House statement that called McCain “a hero,” Trump killed the statement and instead tweeted condolences to McCain’s family that practically left him out entirely.

My deepest sympathies and respect go out to the family of Senator John McCain. Our hearts and prayers are with you!

And this morning, the White House flag was raised back to full-staff only hours after being lowered to honor McCain’s passing. Normally, the flag would stay at half-staff until the Senator’s funeral. The flag on the Capitol remains at half-staff.

Odd to see our American flag flying at full staff @WhiteHouse this AM when the flag at the U.S. Capitol is being flown at half staff, following Senator John McCain’s death. pic.twitter.com/1JCtIUiugN

Now, after his death, it has been announced that McCain chose former presidents Barack Obama and George W. Bush to deliver eulogies at his funeral. Both former presidents have been particularly critical of Trump. Former Vice President Joe Biden will speak at a funeral performed in Arizona before the Senator’s body is moved to Washington to lie in state in the Capitol rotunda.

“These were bitter contests, both of them,” Sen. Jeff Flake, told CBS’ “Face the Nation” Sunday. “To ask them to speak at your funeral, and for them to be honored at the opportunity, that tells you all you need to know.”

Flag back at full staff atop WH. Pres Trump did not issue proclamation on the death of @SenJohnMcCain, which usually calls for flags to remain at half-staff through the day of interment, which is Sunday at the @NavalAcademy. pic.twitter.com/NGasNPT0VB