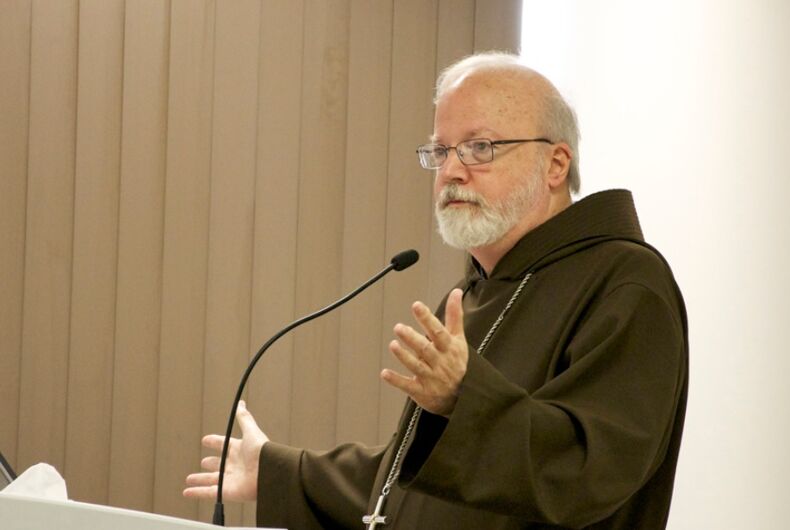 Catholic Bay Staters respect Cardinal Sean O’Malley. He’s viewed by many as a no-holds-barred cardinal when it comes to addressing clergy sex abuse.

In a 2014 interview with America, the Jesuit Review, O’Malley spoke out about the problem.

“In many people’s minds it is an American problem, an Irish problem or a German problem,” O’ Malley said. “The church has to face it is everywhere in the world. There is so much denial. The church has to respond to make the church safe for children.”

But now, some Bay Staters are calling for both Cardinal O’Malley and Pope Francis to step down as reports circulate that O’Malley, too, knew of alleged abuses at the hands of the former D.C. archbishop, Cardinal Theodore McCarrick.

Sadly, the Catholic Church worldwide is still bedeviled with this problem in 2018.

And it raises the question: is the Catholic Church unsalvageable?

While on his trip to Ireland to win back the confidence of Catholics reeling from its church’s mishandling of predatory priests, Archbishop Carlo Maria Viganò, an ultra-traditionalist and unapologetic homophobe, accused Pope Benedict XVI, Pope Francis, and other top Catholic Church officials of knowing about McCarrick sex abuses decades before they became public.

On June 20 McCarrick was removed from public ministry by the Holy See, and on June 27 Pope Francis accepted his resignation for the College of Cardinals.

In a 7,000-word public published letter, Viganò called on Francis to resign.

“In this extremely dramatic moment for the universal Church,” Viganò wrote. “He must acknowledge his mistakes and, in keeping with the proclaimed principle of zero tolerance, Pope Francis must be the first to set an example for cardinals and bishops who covered up McCarrick’s abuses and resign with all of them.”

Viganò might be correct in pointing out the Catholic Church’s moral and ecclesiastical fecklessness to stem the problem with its predatory priests, but he also has a chip on his shoulder.

Viganò is part of the ultra-conservative wing of the Vatican, that is hell-bent against change and inclusion.

Viganò however, is most incensed by the pontiff “giving comfort to a ‘homosexual current’ in the Vatican.” Viganò ran afoul with Francis when he invited Kim Davis, the Kentucky municipal clerk who lost her job refusing to follow a court order to issue marriage licenses to same-sex couples.

While the two warring factions – conservative versus liberal wings – wrestle with the direction the Catholic Church should go in this modern era, the church, nonetheless, is still stymied and stained by continued unaddressed claims of sex abuse by unprosecuted sex offenders.

And O’Malley met last Tuesday with Boston-area priests to address recent alleged sexual misconduct at St. John’s Seminary in Brighton. While addressing this problem, news circulated that O’Malley never addressed a letter sent to him about McCarrick. O’Malley claims that his secretary never gave it to him.

In his mea culpa clean-up statement, O’Malley stated the following: “I understand that not everyone will accept this answer given the way the Church has eroded the trust of our people. My hope is that we can repair the trust and faith of all Catholics.”

The question not asked by the church’s governing body is why does sexual abuse persist as it does among its clerics?

There are two salient causes: a “no-snitch policy” and an unwavering support of church bishops.

The church has a “no-snitch” policy when it comes to child sexual abuse. Canon law allows for the pontifical secret of “allegations” as well as proof of predatory priests. This “cover-up” has been occurring under the pontificate of six popes since 1922.

However, in February 2016, good news came giving hope that canon law was about to change. O’Malley, the president of the Pontifical Commission for the Protection of Minors, stated that bishops have an ethical and moral obligation to report allegations of clergy sexual misconduct and abuse to civil authorities. In December 2016, the commission published its guidelines for bishops and, sadly, O’Malley’s statement was excluded.

Pope Francis promised to implement a “zero tolerance” policy moving forward to stem the problem, but Francis appears to be part of the problem, too, because he supports his bishop.

For example, Francis appointed a bishop in Chile who turned a blind eye to the country’s most notorious predatory priest. In 2011, the Vatican found the priest guilty and sentenced him to a lifetime of “penance and prayer” rather than jail.

And, still, in 2018, Francis supported the Chilean bishop’s decision.

During a closing ceremony in Dublin, Francis asked forgiveness for sexual abuses committed by clerics of his church. However, with no changes in canon law, seminarian training, and his level of moral culpability, Francis’s church has done nothing to earn forgiveness.