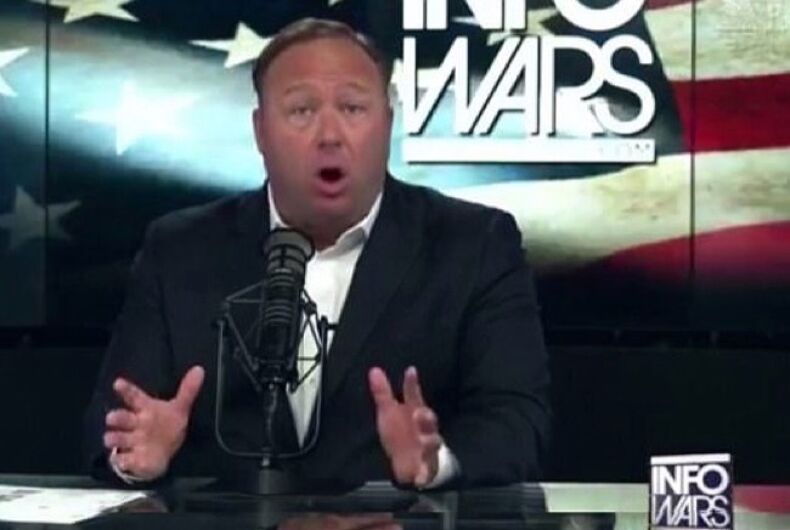 Alex Jones had a bad week, and it couldn’t have happened to a more deserving guy.

After months of hemming and hawing, social media platforms Facebook and YouTube pulled the plug on the conspiracy theorist’s accounts. In addition, Apple yanked Jones’ podcasts, as did Spotify after several days of silence.

That means that Jones will no longer have a venue to promote his crackpot ideas, such as the belief that lesbians eat other people’s brains and gay men are deliberately infecting each other with HIV as part of a “Satanic” plot.

It also means he loses an outlet for his despicable and dangerous conspiracy theories, including that the Sandy Hook school massacre was a hoax.

Jones still has his InfoWars website, but he predictably cried – literally – about being banned from a large swath of the internet. He was quick to describe the the moves were censorship, and he was joined by a brigade of conservatives, including would-be Speaker of the House Kevin McCarthy, and pundits. They argue that the ban violates Jones’ free speech rights.

Let’s call bullshit on that argument.

Free speech does not mean you are guaranteed a platform for whatever you want to say. It just means you can say it.

It means Jones can stand on a soap box on a street corner and expound upon all the tin-foil-hat conspiracies he can conjure up. It does not mean that anyone is obliged to give him a megaphone to do so.

The problem is that social media platforms like to present themselves as neutral grounds for the exchange of ideas. In fact, they are businesses profiting from the number of users they have. The nice language about “community standards” and “guidelines” are entirely secondary to their broader organizational goal of delivering returns to stockholders.

Twitter demonstrated this idea in spades when it decided that Jones didn’t deserve to be banned from the platform. CEO Jack Dorsey argues that facts will serve as a counter, as if giving facts equal footing with loony lies is a great gift to society.

The platforms seem unwilling to acknowledge the huge influence that they now have on political discourse.

Facebook downplayed the volume of Russian accounts meant to influence the 2016 presidential election months after the accounts came to light. Mark Zuckerberg called the news “crazy” when it first emerged.

But Zuckerberg also showed a blithe disregard for community standards last June when he wouldn’t even say that Facebook would ban Holocaust deniers. In the same interview, Zuckerberg drew a distinction between “giving people a voice” and “keeping people safe,” clearly opting for the latter as his main principle.

Yet the fact that Jones continued on Facebook for well over another month just shows that the social media platforms have no clear idea of how to handle the beast that they’ve unleashed. They don’t have a commitment to journalistic values of accountability and accuracy, even as social media is killing off traditional media outlets.

Social media platforms like to promote the idea that they are neutral, but in fact they are enabling ideas that are not only false, but dangerous.

The people fretting about Jones’ freedom of speech cite the slippery slope argument: first it starts with Jones, and soon it spreads out of control. That’s a convenient excuse for the social media giants, for whom monitoring their sites would be a giant undertaking.

But if you can’t ban someone as demonstrably crackpot at Jones, who can you ban?

Someone fired off shots in a DC pizzeria last year while “self-investigating” a conspiracy Jones promoted about a pedophile ring there being run by Clinton operatives. What kind of community standards does that not violate?

Even now, YouTube is hosting an account promoting a similar lie about a doughnut shop in Portland, OR.

Social media platforms want to remain agnostic. Yet that amounts to shirking their responsibility. Deciding what a community standard is will be hard work which will no doubt anger a lot of people.

But not deciding means that the standard is the lowest common denominator.

For Alex Jones, QAnon followers and neo-Nazis, that’s exactly what they need to thrive.