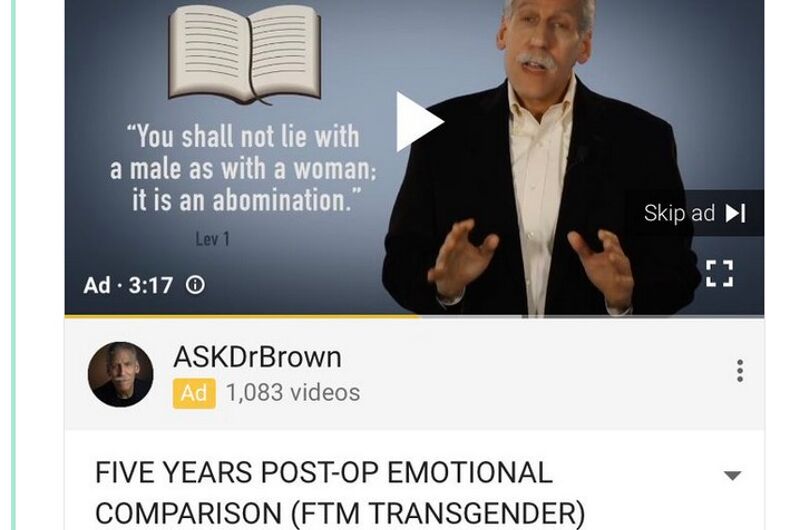 An ad about the Bible showed on a video made by a trans man.Photo: Screenshot/Twitter

YouTube has come under fire for putting anti-LGBTQ ads on LGBTQ videos.

Twitter user Jace Aarons tweeted an example. He found an ad from Michael Brown, a conservative radio host, playing before a video from Chase Ross, a transgender YouTuber.

@ChaseRoss here’s that anti-gay ad on your video, I’ll reply with a screenshot that shows it’s on your video pic.twitter.com/OZDtXt3lnm

He showed a screenshot of the ad being played before one of Ross’s videos.

@ChaseRoss @youtube so YouTube will push religion and anti gay beliefs but heaven forbid it (see my pun) if a kid gets helpful information about theirselves pic.twitter.com/zi8My7sdyj

And he posted a copy of the video with audio.

The ad says that people can’t be both Christian and gay and reads Bible passages that call homosexuality an “abomination.” Brown asks viewers to “interpret your sexuality through the lens of the scriptures”… and to give him money.

“No gift is too small,” Brown says in the video.

Ross asked why YouTube accepted the ad at all.

Why is YouTube taking money from these organizations ? https://t.co/aPZCgpqb3v

Bi writer Gaby Dunn also asked her followers if they have seen anti-LGBTQ ads on her YouTube channel.

If you're a fan of JBU, have you been seeing anti-gay ads before our videos? Some viewers just alerted me to this and other youtubers are having this problem too.

Some people replied with examples. This Twitter user found an ad for the Alliance Defending Freedom – an SPLC designated hate group – before a video from Anna Akana.

I just found one playing in front of an @AnnaAkana video 😡 pic.twitter.com/pVNUARTVGU

Another user saw an Alliance Defending Freedom ad before a Just Between Us video.

Same happened to me a few days ago with a JBU video. In support of an anti lgbt lawsuit based on religious freedom. I couldn’t believe YouTube would allow the ad to run. Honestly super upsetting pic.twitter.com/144Bc666Cm

The ads come a year after controversy erupted on YouTube about how the video-sharing site’s “restricted mode” was blocking all LGBTQ content, even videos that were perfectly appropriate for younger audiences.

Bi YouTuber Dodie Clark said that YouTube’s policy is homophobic. “I mean that’s just plain and simple homophobia, right?” she tweeted. “The platform we use is homophobic?”

i mean that’s just plain and simple homophobia right?! the platform we use is homophobic? https://t.co/4W5jYJ0dLP

YouTube has long had a problem with hate groups using it as a way to disseminate their views. Accepting ads from hate groups isn’t addressing that problem