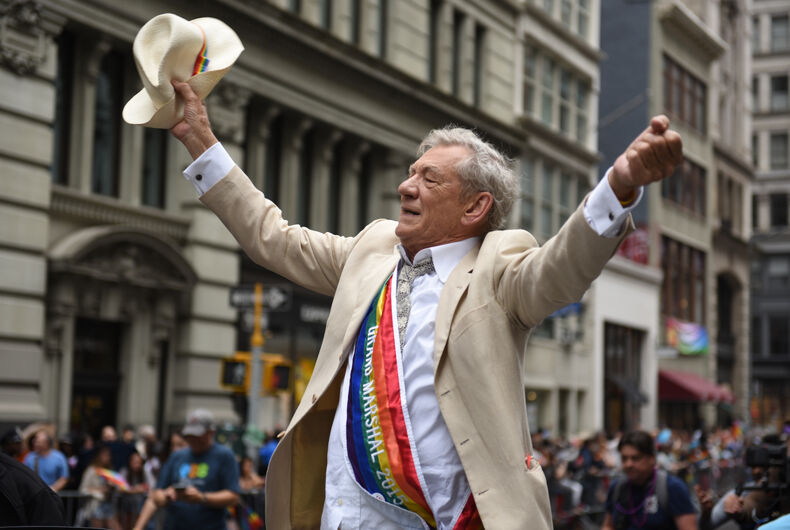 Sir Ian McKellen is not happy that Dumbledore won’t be gay in the upcoming Fantastic Beasts: The Crimes of Grindelwald movie.

While Dumbledore wasn’t “out” as gay in the Harry Potter franchise, series author J. K. Rowling has confirmed on social media that the character is gay and formerly had a relationship with fellow wizard, and titular character, Gellert Grindelwald.

In 2016, the author said at a press conference, “I will say that you will see Dumbledore as a younger man, and quite a troubled man because he wasn’t always the sage. He was always very clever, but we’ll see what I think was the formative period of his life. As far as his sexuality is concerned, watch the space.”

In a wide ranging interview with Time Out, the out gay actor spoke about his career, including playing the wizard Gandalf in the Lord of the Rings movie series. Since people often think McKellen portrayed Dumbledore as well, they asked him what he thought about the erasure.

“Isn’t he? That’s a pity. Well, nobody looks to Hollywood for social commentary, do they?” the actor quipped before launching into a few thoughts on the lack of diversity on the big screen.

“They only recently discovered that there were black people in the world. Hollywood has mistreated women in every possible way throughout its history. Gay men don’t exist. Gods and Monsters [1998], I think, was the beginning of Hollywood admitting that there were gay people knocking around, even though half of Hollywood is gay.”

Director David Yates disappointed fans earlier this year when he said Dumbledore will not be “explicitly” gay in the movie. While he acknowledges the franchise’s canon, he admits his flick will effectively closet the character.

“But I think all the fans are aware of that,” Yates continued, speaking to Entertainment Weekly. “He had a very intense relationship with Grindelwald when they were young men. They fell in love with each other’s ideas, and ideology, and each other.”

Rowling, responding to disappointed fans on Twitter after the announcement, saying she was  “sent abuse about an interview that didn’t involve me, about a screenplay I wrote but which none of the angry people have read, which is part of a five-movie series that’s only one instalment in.”