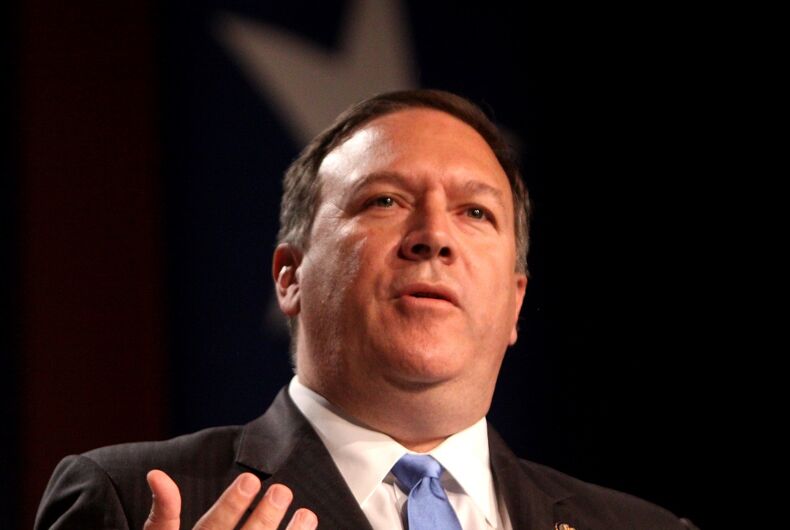 Former CIA Director Mike Pompeo’s nomination to Secretary of State was given a favorable recommendation by the Senate Foreign Relations Committee.

His nomination now goes to the full Senate, where Republicans are expected to approve him and make him the nation’s top diplomat.

Pompeo has a long history of anti-LGBTQ actions and statements. As a House member, he co-sponsored legislation to give people a religious exemption to anti-discrimination laws and opposed overturning Don’t Ask, Don’t Tell, the law that banned LGB people from openly serving in the military.

He also called the 2015 Obergefell ruling a “a shocking abuse of power” because it legalized marriage equality in the U.S. and he said that same-sex parents weren’t “ideal.”

During his confirmation hearing, Senator Cory Booker (D-NJ) asked Pompeo, “Is being gay a perversion?” Pompeo refused to directly answer the question.

The State Department has several programs in place that help advance equality in countries where LGBTQ people are oppressed. The State Department flew the rainbow flag at embassies around the world, developed a public-private fund called the Global Equality Fund to raise money for LGBTQ civil rights activists, and created a Special Envoy for the Human Rights of LGBT Persons during the Obama Administration.

Rex Tillerson – Donald Trump’s Secretary of State for the past year – did nothing to stop the State Department from continuing these LGBTQ programs, which annoyed hate groups on the right like the Family Research Council.

Now the right is hopeful that Pompeo will end these programs, while LGBTQ advocates worry about people in other countries who need more friends, not fewer.

In Chechnya, gay and bi men have been arrested and put in detention sites. In Uganda, homosexuality can be punished by the death penalty. In Indonesia, transgender people have been rounded up and publicly humiliated by local law enforcement.

Senator Rand Paul (R-KY) made some noise about possibly opposing Pompeo’s nomination, but voted in favor. Senator Johnny Isakson (R-GA) couldn’t attend the vote because he was at a funeral, so Senator Chris Coons (D-DE) voted “present” to allow the process to move forward.

A gay man was eating pizza with his sister. Then someone beat him with a bike chain.