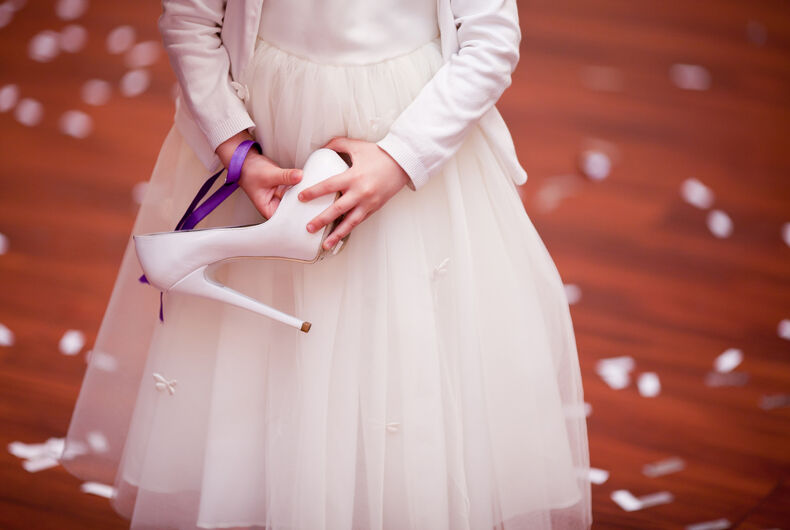 Tennessee lawmakers have decided against changing the state’s marriage laws to outlaw child marriage, because the head of the “family values” group Family Action Council of Tennessee – wants to sue to try to overturn marriage equality.

The bill, sponsored by Democrats in both chambers of the state legislature, would raise the age for marriage to 18. A current loophole allows a judge to grant a marriage license to a minor no matter how young they are.

Advocates have cited “marriages” involving girls as young as ten years old in the state.

Legislators in Kentucky have also dragged their feet to outlaw child marriages in the past few weeks at the urging of the religious organization Kentucky Family Foundation. A vote on similar legislation to the Tennessee bill was delayed for the second time hours before legislators were expected to vote on it.

Former Republican state senator David Fowler, president of the Family Action Council, convinced House Majority Leader Glen Casada to send the bill to a summer “study committee” where it is expected to die.

Casada pointed to an email he got from Fowler detailing a legal strategy the group would use to attempt to undermine the Supreme Court’s Obergefell v. Hodges decision that legalized same-sex marriages nationwide.

According to the Tennessean, Fowler’s dubious legal theory “is that the Supreme Court’s ruling essentially nullified all Tennessee marriage licences, as it required legal marriage to be opened up beyond just a man and a women.”

“Therefore, according to Fowler, if the state were to move forward with this logic in a legal argument against the ruling, modifying state marriage law could acknowledge its existence.”

Questioned by Representative Darren Jernigan, the bill’s author, about the convoluted logic Fowler was using to justify child sexual abuse, Fowler told him, “Some people think the state should regulate marriage, and I do not.”

“Basically, what has happened is the Family Action Council wants to continue to let 13-year-olds get married in the state at the sake of their court case against same-sex couples,” Jernigan said later. “It’s disgraceful. I’m embarrassed for the State of Tennessee.”

“It is disgusting that lobbying organizations would embrace kids marrying adults. We see evidence of parents who are addicted, abusive, neglectful pushing their children into predatory arms. Appalling,” Republican state representative Julie Raque Adams, the sponsor of the Kentucky bill said in a tweet after the bill was yanked hours before a crucial vote.

Is it OK to out queer students to their parents if they’re being bullied at school?