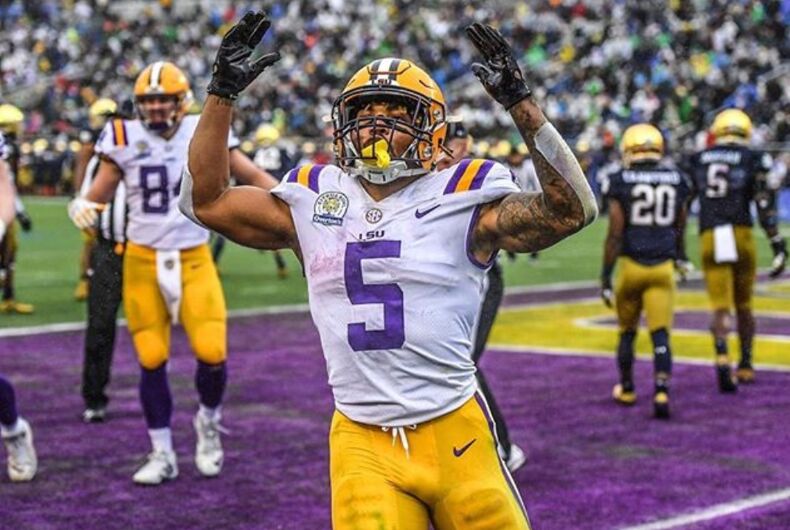 It seems the National Football League (NFL) still hasn’t learned its lesson about asking players about their sexual orientation.

Running back Derrius Guice, a former LSU Tigers standout, said in an interview Wednesday with SiriusXM’s NFL Radio that a team asked him at the Scouting Combine if he likes men. NBC Sports has confirmed through a source that the question was indeed asked.

It is unclear which team asked the question.

“It was pretty crazy,” Guice said on Late Hits. “Some people are really trying to get in your head and test your reaction.”

This won’t be the first time it has been forced to do so, either.

Two years ago an Atlanta Falcons assistant coach inquired about the sexual orientation of cornerback Eli Apple, who ended up getting drafted by the New York Giants. The league also conducted an investigation in 2013, when a team asked tight end Nick Kasa if he liked girls.

The NFL has said the question is off limits and that anyone who asks it is subject to discipline.

Guice said it wasn’t the only inappropriate question he was asked. Another unnamed team asked him if his mother is a prostitute.

“I go in one room, and a team will ask me do I like men, just to see my reaction. I go in another room, they’ll try to bring up one of my family members or something and tell me, ‘Hey, I heard your mom sells herself. How do you feel about that?'” he said.

The idea that asking someone about their sexual orientation is a means of rattling them puts into perspective why Michael Sam is the only player who felt comfortable being publicly out while still in the league.

Guice’s reaction to the question on Twitter suggests he is not pleased with the idea that anyone might think he is gay, although the vague nature of the tweet leaves it open to interpretation.

When a fan complemented him on not losing his temper when asked those questions, he responded, “That’s what they want me to do.”

Boyyyyyyy @DhaSickest You a bad bad man ! I would have lose it

You earned my respect..

That’s what they want me to do. https://t.co/Vefgtv0yPo

Former NFL running back Larry Johnson criticized the question on Twitter, noting that there are much bigger issues than one’s sexual orientation that the league should be concerned with, considering the history of some of its players throughout the years.

You’re looking for Sexuality preferences and not Domestic Violence tendencies…or the sheer fact he can put the ball in the end zone to make you more money? Aite…….. if it sounds weird coming from me. It should. #DerriusGuice pic.twitter.com/RRRpdc5Mpa

Journalist Jason Gay questioned how serious the NFL is about their supposed ban on this question.

This is illegal. The NFL can find out in 5 minutes who did it; let’s see how serious they are. https://t.co/qEm4loLIDQ

“The fact that Derrius Guice was asked by an NFL team — and a prospective employer — about his sexual orientation is absurd and inappropriate,” said HRC Director of Public Education and Research, Ashland Johnson.

“With similar incidents already reported, it’s clear that the NFL did not do enough to prevent it from happening again. Guice’s experience illustrates the risks faced by millions of LGBTQ people today in employment, athletics, housing and other areas of their lives,” Johnson continued. “It’s why we need swift action to condemn these kinds of practices and to fight for passage of the Equality Act to ensure comprehensive nondiscrimination protections for LGBTQ people. The NFL should take serious actions that address these unacceptable incidents and the perpetuation of an unwelcoming anti-LGBTQ environment, including publicly supporting the Equality Act.”

Alright, NFL, your move. Do you like keeping your word?

Federal courts are standing up to Trump & Sessions’ anti-transgender agenda