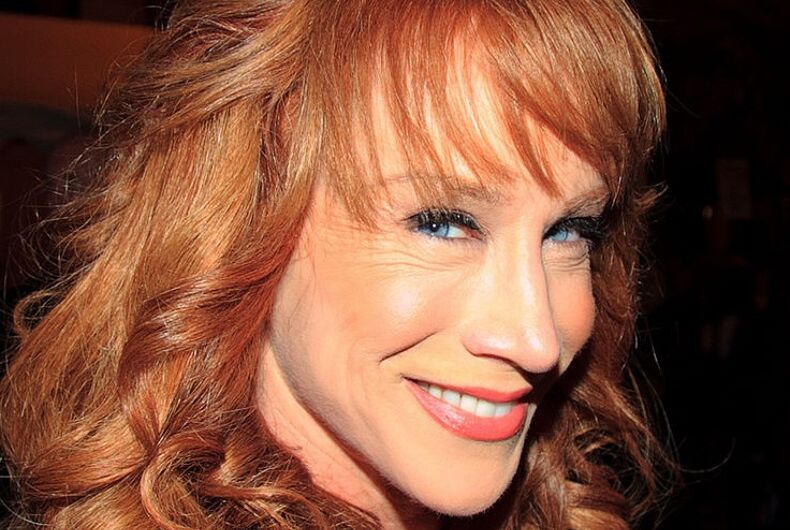 Comedian Kathy Griffin isn’t a fan of Donald Trump, and she might soon tell him that to his face.

Last year, Griffin took part in a photo shoot that was critical of Donald Trump, which led to her being attacked by the Trump family, harassed and threatened by rightwingers, and investigated for two months by the Justice Department in what she called an attempt to “ruin [her] life forever.”

Earlier this week, she said that if she ever saw him, she’d say: “Fuck off. Fuck off you piece of shit. You stupid piece of shit.”

She just might do that. She said on Twitter that she has been invited by the Washington Blade and the LA Blade to the White House Correspondents’ Dinner.

Honored that I'll be attending the White House Correspondents Dinner for the first time this year. I'll be the guest of the great team at the @WashBlade @losangelesblade!

Neither paper has confirmed the invitation yet.

The White House Correspondents’ Dinner has been criticized for years for the coziness between journalists and the politicians they cover that it displays.

But it isn’t always just a chance for the media elite to hobnob with the political elite. In 2006, Stephen Colbert delivered withering criticism of the Bush Administration and the White House press corps during his speech at the event.

The dinner will take place on April 28 this year.

The latest ‘cure’ for being gay is fermented cabbage juice. It doesn’t work.