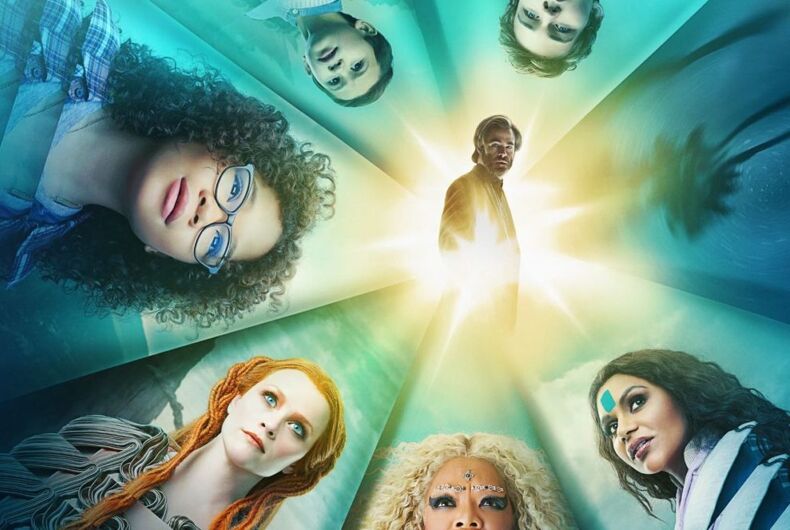 A Wrinkle in Time was a must-see film for me. And completely different from Black Panther.

It doesn’t mean, however, Ava Duvernay’s $100 million dollar film with a multicultural cast isn’t without problems. It is one of the reasons the film has received mixed reviews unlike Black Panther’s ongoing and wildly enthusiastic critical appraise.

While it is wrong to expect from Duvernay what was achieved by Ryan Coogler’s blockbuster hit just because they are both African-American film directors – and moviegoers have never experienced back-to-back films with black actors as leads – the critiques about Duvernay’s interpretation of Madeleine L’Engle’s 1962 classic is not unwarranted.

What is unjustified are the racist critiques about using a young black female actress to depict a universal theme about the messy complications, frustrations, and uncertainty about girlhood.

“Teenage Meg Murry and her mother, both white like the rest of their family in the 1962 A Wrinkle in Time novel, are portrayed in this film version by black actresses Storm Reid and Gugu Mbatha-Raw. Dad is played by Caucasian Chris Pine,” movie critic James Dawson wrote in The Federalist.

“Twin brothers from the book are missing entirely from the movie, which may be a blessing, considering that political correctness probably would have dictated they be played by a Native American dwarf and a disabled transsexual.”

Dawson is operating out of the tendentious belief that only white actors should portray Shakespearean characters – unless, of course, it’s Othello, since blackface is now no longer in fashion. These same bigots are outraged by black-cast adaptations of The Wiz (1978), Magnolia (2012) and Annie, Steel (2014).

The hashtag “#OscarsSoWhite” emerged out of the glaring absence of people of color. Outside of urban or comedic or hypersexualized racial stereotypes, a meaningful portrayal of African Americans in films are more an anomaly than the norm.

Today’s modernized versions of coons, thugs, mammies, and maids are expected roles of African-American actors in both black and white films, which make Black Panther a seismic surprise and A Wrinkle in Time shockingly confusing to white moviegoers like Dawson.

Black little girls of my era weren’t seen on television. Before my era, watching old black and white Shirley Temple films only reminded me I could never be America’s little darling.

And Temple’s moments with the great African-American tap-dancer Bill “Bojangles” Robinson in four musicals only cemented, for me, just how cute, precocious, and better tap dancing little black girls could never be in step with the only accepted image of girlhood.

“I grew up in an era where there was absolutely zero, minus, images of girls like her (Storm Reid) in pop culture,” Oprah stated in an interview with NBC News. Oprah plays Mrs. Which in A Wrinkle in Time

“So I do imagine, to be a brown-skinned girl of any race throughout the world, looking up on that screen and seeing Storm, I think that is a capital A, capital W, E, some, AWESOME, experience,” Oprah added. “I think this is going to be a wondrous marvel of experience for girls that in the future they will just take for granted.”

Film critic Aramide A. Tinubu depicts DuVernay’s adaptation of A Wrinkle in Time as a love letter to black girls and DuVernay depicts the film as being “black woman-fied.” And it is, in my opinion, not only a black woman-fied love letter but it is also a shout out saying, “ I see you Oprah. I see you Irene. I see you all with all your messy and wonderful selves.”

African American female portrayal in films as children or adults are usually one-sided and painfully dehumanizing to watch.

In 2010, the actress and comedian Mo’Nique captured the gold statue for best-supporting actress in the movie Precious, based on the novel Push by Sapphire, as a ghetto welfare mom who demeans and demoralizes her child every chance she can.

And, in 2012, Amandla Stenberg portrayed the character Rue in the blockbuster film The Hunger Games. The film script followed the book closely, unlike Dawson’s complaint about A Wrinkle in Time, but some fans were apoplectic, nonetheless. Sadly, the result was a tweeting tsunami of racist comments focusing on the presence of the few black characters in the film, especially of Rue:

“why does rue have to be black not gonna lie kinda ruined the movie.”

“Kk call me racist but when I found out Rue was black her death wasn’t as sad.”

“why did the producer make all the good characters black.”

“Awkward moment when Rue is some black girl and not the little blonde innocent girl you pictured.”

Little black girls are in the shadow of this racialized political moment of police brutality, school shootings and the #MeToo movement. A Wrinkle in Time was my must-see film, because it the only time of late, I see young Irenes and little black girls’ struggle depicted.