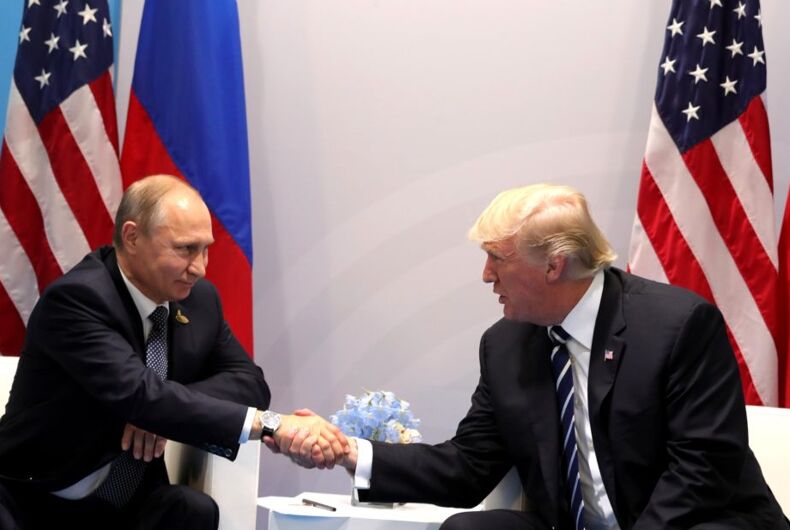 There’s another reason why Donald Trump’s congratulatory call to Russian President Vladimir Putin on his reelection is a terrible thing: it gives Russia the green light to continue its persecution of LGBT citizens.

The appointment of Mike Pompeo as Secretary of State also signals Russia that the US won’t condemn its anti-LGBT policies. Pompeo has a long record of anti-LGBT actions, including opposing the repeal of “Don’t Ask, Don’t Tell,” and condemning the Supreme Court’s marriage equality decision.

Against the advice of his national security advisors, Trump couldn’t resist continuing his “bromance” with Putin by picking up the phone congratulating Putin on an election win that seemed all but guaranteed before the first ballot was cast. There are a host of reasons why this was a bad idea, not the least of which is that it seems to give the nod to anti-LGBT persecution in Putin’s Russia.

The stories have been coming out of Russia for years. LGBT people —and gay men in particular — have been harassed, detained, arrested, tortured, “disappeared,” and even murdered with the tacit approval of Putin’s government.

It began in 2013 when the Russian Duma passed a law making it illegal to expose children to information about homosexuality. The law, part of Putin’s effort to appeal to ultra-nationalists and the Orthodox Church, was accompanied by anti-gay violence across Russia.

Anti-LGBT violence doubled following the ban on “gay propaganda.” In Volgograd, a gay man’s nude body was found, with his skull caved in and his genitals scarred by beer bottles.

In Chechnya, hundreds of gay and bi men were rounded up by police and many tortured. One man said his captors gave him electric shocks, beat him with wooden sticks and metal rods, shouted verbal abuse at him, and demanded to know the names of other gay men in Chechnya.

Putin has identified Russia’s LGBT community as an enemy whose persecution serves his political interests. Trump’s congratulatory call is a “thumbs up,” signaling tacit approval of Putin’s anti-LGBT policies.