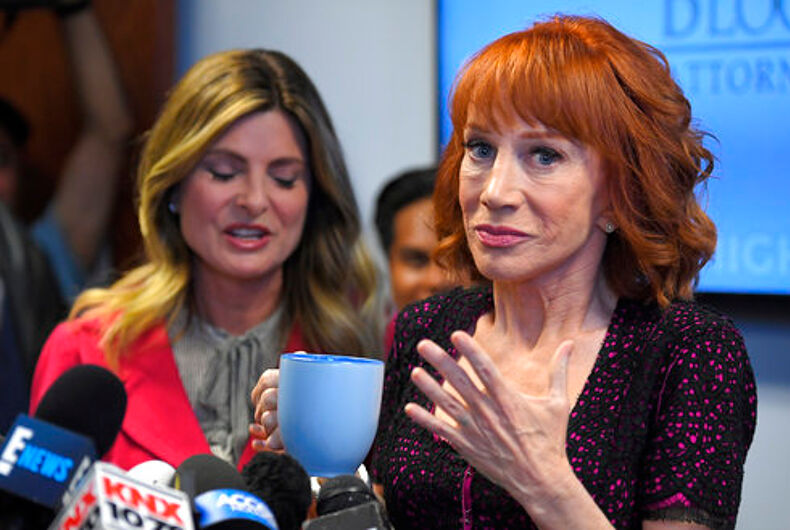 Comedian Kathy Griffin, right, speaks along with her attorney Lisa Bloom during a news conference, Friday, June 2, 2017, in Los Angeles, to discuss the backlash since Griffin released a photo and video of her displaying a likeness of President Donald Trump's severed head. Photo: AP Photo/Mark J. Terrill

Embattled comedian Kathy Griffin says she’s not afraid of Donald Trump and plans to keep making fun of him but maintained that she’s sorry for a video that depicted her holding a likeness of the president’s severed, bloody head.

At a rambling press conference Friday, Griffin tearfully predicted her career is over and said Trump “broke me.” Since the video was posted Tuesday, she has lost her job co-hosting CNN’s New Year’s Eve special and had all her upcoming comedy shows cancelled. Trump, first lady Melania Trump and Donald Trump Jr. have publicly criticized the video.

Griffin, who asserted that she has been contacted by the Secret Service, said the Trumps are “trying to ruin my life forever.”

“The president, the first lady and the Secret Service have all made very clear their view on those thoughts,” White House press secretary Sean Spicer said.

Griffin, 56, repeated her claim that the video was a parody, meant as a pointed comeback to Trump’s remark last summer that former Fox News Channel personality Megyn Kelly had “blood coming out of her eyes, blood coming out of wherever.”

“I’m not laying down for this guy,” she said in one defiant moment. “I’m going to keep making jokes about this guy.”

“Kathy Griffin’s career was over long before she attempted to make a disgusting joke about decapitating the President,” Reed said. “What she did was wrong and President Trump and his family have every right to condemn it.”

Griffin appeared surprised at the number of cameras and reporters in a packed conference room at her lawyer’s office, her hands shaking at one point when she took a sip of water. She switched between contriteness to combativeness during the press conference, during which she attempted several nervous jokes that drew laughs mostly from her attorney, Lisa Bloom.

Bloom said the comedian has a First Amendment right to make fun of the president.

“Whether or not you get, or like, her artistic expression, in America, Kathy has the right to parody the president,” Bloom said. “She never imagined it would be misinterpreted as a threat of violence against Trump.”

Bloom, a former truTV anchor and lawyer Gloria Allred’s daughter, has represented Wendy Walsh, who has accused former Fox News Channel personality Bill O’Reilly of hurting her career after she spurned his advances. O’Reilly has denied the accusations

Backlash against Griffin has continued to grow. Griffin said five of her performances have been canceled this week.

Venues in New Jersey, New York, New Mexico, Pennsylvania and California canceled upcoming shows. The Community Arts Theater in Williamsport, Pennsylvania, posted on its website that the show had been dropped “due to the recent controversy surrounding Kathy Griffin and the concern for the safety and security of our patrons and staff.”

“After hearing from many Minnesotans who were rightfully offended, I’ve come to the conclusion that it would be best for her not to participate in the event we had previously scheduled,” the Minnesota Democrat said Thursday, a day after he had said she was still welcome. “I understand why Minnesotans were upset by this, and I take that very seriously.”

He said what Griffin did “was inappropriate and not something that should be anywhere in our national discourse.”

Though Griffin apologized within hours of the images appearing online Tuesday, they were met with swift and widespread condemnation.

Trump later tweeted that Griffin “should be ashamed of herself” for posting the images.

Even Anderson Cooper, her CNN co-host for the New Year’s Eve show, condemned the images. Griffin said she has not spoken to Cooper since, and appeared visibly upset and struggled to speak when fielding questions about Cooper.

The comic has faced controversies before for her abrasive humor, but none as widespread as the one generated by Tuesday’s images.

Michigan court: Seeing a trans woman is not sexual harassment