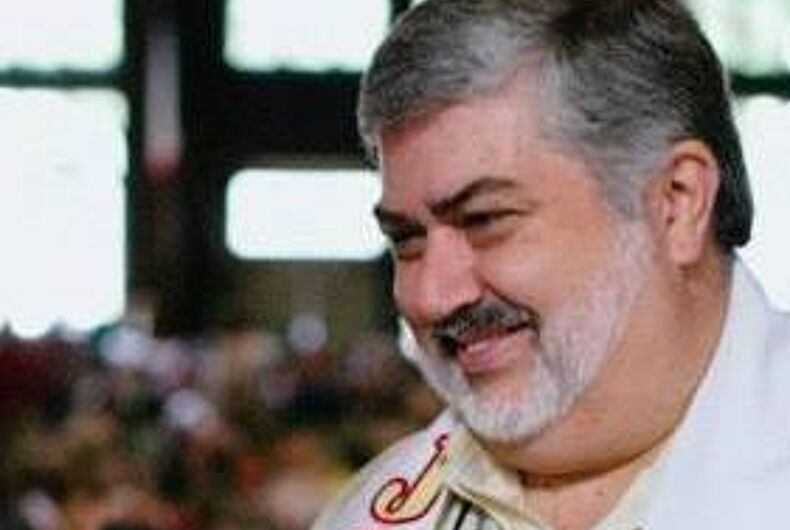 A United Methodist Church pastor from Cincinnati has faced another church trial.

This time, the Rev. David Meredith, of the Clifton United Methodist Church, faced a Feb. 9 hearing in a regional Methodist court in Indianapolis, with a ruling expected within 20 days.

Last year, Meredith, 61, married Jim Schlachter, his partner of 29 years, in a Methodist church by a Methodist minister.

His Cincinnati church had designated itself as a “reconciling congregation,” but 11 members then protested his marriage. Yet at Friday’s hearing, more than 100 of his supporters crowded into the meeting room for the hearing.

Related: In a brave, moving sermon, this Methodist pastor came out to her entire congregation

Officials in Meredith’s Methodist region had first tried him on three charges. He was exonerated on two morals charges but was found guilty on a disobedience charge. Other mainline Protestant churches have changed, but Methodist rules still disallow its ministers from conducting homosexual unions in its churches.

When other area churches appealed the lower-church ruling on Meredith, his case went to the regional court.

“There’s a mean-spiritedness to it,” Meredith said to Cincinnati.com. “They refuse to let me and other gay and lesbian clergy and our communities simply be in the church.”

Meredith isn’t the only LGBTQ Methodist pastor under attack within the 7.3 million-member denomination.

In August 2016, pastor Cynthia Meyer, of the Edgerton United Methodist Church, near Kansas City, gave up her position to avoid a church trial. She had come to to her congregation the previous January.

Last month, the Rev. Anna Golladay, in Chattanooga, Tennessee, was dismissed after officiating at a same-sex wedding. The local Methodist conference withdrew the license of the pastor, who served St. Marks and St. Elmo United Methodist churches.

As early as 2012, at least 15 regional Methodist conferences had protested church rules against their LGBTQ pastors.

Going into the hearing, Meredith said he was optimistic.

“I have been in the church for 46 years,” he said to RTV6 News in Indianapolis. “I wouldn’t have stayed in the United Methodist Church my entire life under the threat of things that are standing against me if I were not a person of hope. So I am hopeful.”