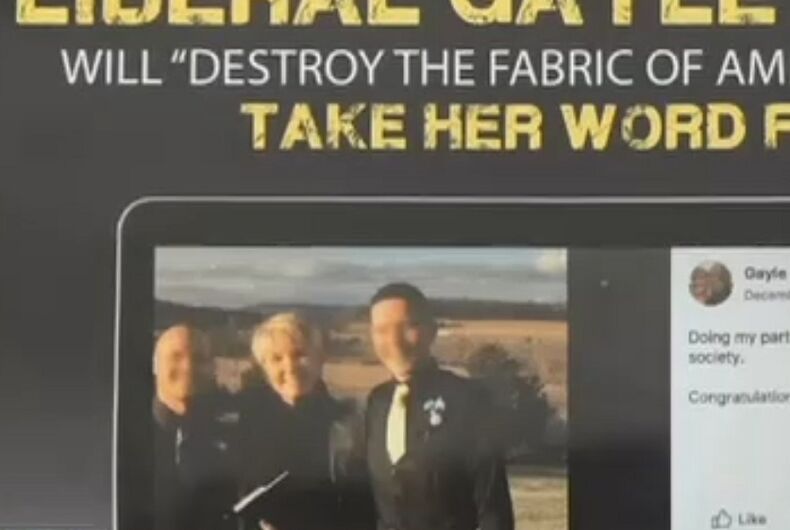 A gay couple has hired an attorney to sue their state’s Republican Party after a photo of their wedding was used in an attack ad.

Shane and Landon Morgan of Murfreesboro, Tennessee, got married in a ceremony officiated by Gayle Jordan. Jordan posted a picture of herself with the happy couple to Facebook.

Jordan, a lawyer, is now running for the state senate, and the Tennessee Republican Party used the image in a mailer to attack her.

“Liberal Gayle Jordan will ‘destroy the fabric of American society.’ Take her word for it,” the mailer said.

“To see our picture on our wedding day being used in such a vile manner, it’s taken that special moment and ruined it,” Shane said. “Ruined it. Very hurt. Very hurt.”

An Air Force veteran who suffers from PTSD, Shane said that the mailer has hurt his mental health. “I’m under a lot of stress, and with my PTSD, it’s just flaring up even worse.”

A spokesperson for the Tennessee Republican Party said that the mailer was not meant to attack the couple. Instead, they say they wanted to show the message Jordan wrote next to the photo as a joke: “Doing my part to destroy the fabric of American society.”

The spokesperson said that the words were “serious,” even if they were a joke.

Of course, if the Tennessee Republican Party only wanted to criticize Jordan’s words, they could have quoted them without publishing the photo.

“I think they knew what they were doing,” Shane said.

“It’s just sad anyone would use someone’s wedding photos, which represent one of the happiest days in their lives, to attack somebody,” Chris Sanders of the TN Equality Project said.

Jordan has faced repeated attacks because she is an atheist. “I just feel like her views are radical,” said her opponent Shane Reeves, who is a Christian and a Republican.

The election will be held tomorrow.

St. Louis is rallying around a gay football player targeted by a hate group

This gay minister is on trial again for loving his husband