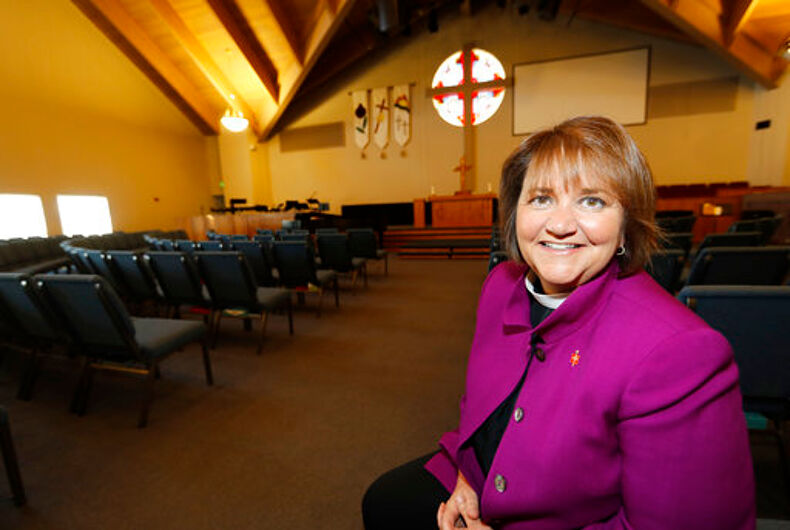 This Wednesday, April 19, 2017 photo shows Bishop Karen Oliveto in the sanctuary of a United Methodist Church near her office in Highlands Ranch, Colo. On Tuesday, the highest court in the United Methodist Church considered whether to invalidate the election of the denomination’s first openly gay bishop, Oliveto, amid a struggle to avoid schism over the Bible and same-sex relationships. Photo: AP Photo/David Zalubowski

The first openly lesbian bishop in the United Methodist Church can stay on the job for now, but she is subject to a disciplinary review that could lead to her removal, the top church court ruled Friday.

Bishop Karen Oliveto’s civil marriage to another woman violates church law that bars clergy who are “self-avowed practicing homosexuals,” the Judicial Council said. However, a decision over whether she can remain in the position must come from a separate disciplinary process, the court ruled.

Oliveto was elected last year to lead a Denver-area church region that is part of the Methodist Western Jurisdiction, which has rejected the denomination’s position that “the practice of homosexuality is incompatible with Christian teaching.” Within minutes of her election, a challenge was filed by the Oklahoma-based South Central Jurisdiction, leading to Friday’s ruling.

The case is the latest chapter in an intensifying fight over LGBTQ recognition that is fracturing the 12.8 million-member denomination — the third-largest faith group in the U.S. Earlier this week, bishops announced a special 2019 meeting of its top legislative body, or General Conference, expressly to address church law on sexuality and find ways the denomination can avoid schism.

LGBTQ advocates in the church have stepped up pressure to lift prohibitions on gay clergy. Bishops have conducted same-sex weddings in defiance of church policy and dozens of LGBTQ clergy have come out, risking being defrocked. Evangelical Methodists, who have gained strength in the denomination in part through growth of Methodist churches overseas, have responded by pushing to enforce church policies. The court said Friday that bishops who consecrate an openly gay bishop were considered in violation of Methodist law and also subject to church discipline.

The Methodist policy making body has upheld the church’s stand on same-sex relationships since 1972, even as other mainline Protestant groups, including the Episcopal Church and the Presbyterian Church (U.S.A.), have approved same-sex marriage.

The ruling Friday was made on a 6-3 vote. Oliveto said she felt “grateful” for the chance to remain as bishop as she and other church leaders study what the decision means for her future. Bruce Ough, president of the Methodist Council of Bishops, said the decision would not ease “the disagreements, impatience and anxiety” in the church, but he appealed to church members to stay unified.

© 2017, Associated Press, All Rights Reserved.
This material may not be published, broadcast, rewritten, or redistributed.
News (USA)
United Methodist Church