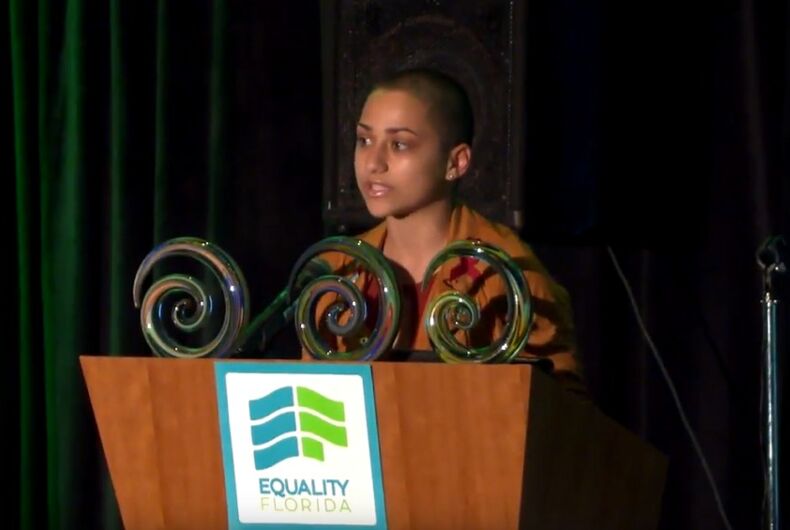 Equality Florida held its annual gala on Saturday, where Parkland shooting survivor Emma Gonzalez was presented with the group’s Voice for Equality Award.

Gonzalez, who is bisexual and runs her school’s gay-straight alliance group, began her acceptance speech by asking for a moment of silence, both for the victims of the Parkland shooting and at Pulse nightclub in 2016.

The activist noted the importance of recognizing the victims of these deadly mass shootings, putting a face on an ongoing tragedy we are in danger of normalizing due to its sheer frequency at this point.

“The MSD students who are here tonight are very thankful and humble that our GSA, its sponsors, and outspoken members of the club, are being honored by Equality Florida,” she told the crowd.

“Many of the members of our GSA this year have for the first time found a place where they can be themselves freely, can experiment with names and labels while learning about a culture that is widely ignored in textbooks and curriculum.”

“It is for us a combination of the oppression faced in the LGBT+ community, among being students who are told to listen rather than to speak, the unsatisfyingly short periods of time in which we are allowed to be our true selves, and a million other reasons, that has contributed to us jamming our feet in the door of the media and refusing to stand back in the time of this senseless tragedy,” she continued.

“Now that we know that we have the power to call b.s. nothing can stand in our way of using it. I am Emma Gonzalez, I am a bisexual Cuban, we are people of different genders, skin colors, stories, we are members of GSA at Marjory Stoneman Douglas in Parkland, Florida, and tonight we are all MSD strong.”

Watch Gonzalez deliver her speech below.

Gonzalez has become one of the most outspoken and eloquent advocates to come out of the Parkland shooting tragedy, urging more young people to get engaged and fight for gun control.

Part of the efforts for change include the March 24th March For Our Lives rally, to take place in Washington, D.C. and in other cities nationwide.

This gay minister is on trial again for loving his husband