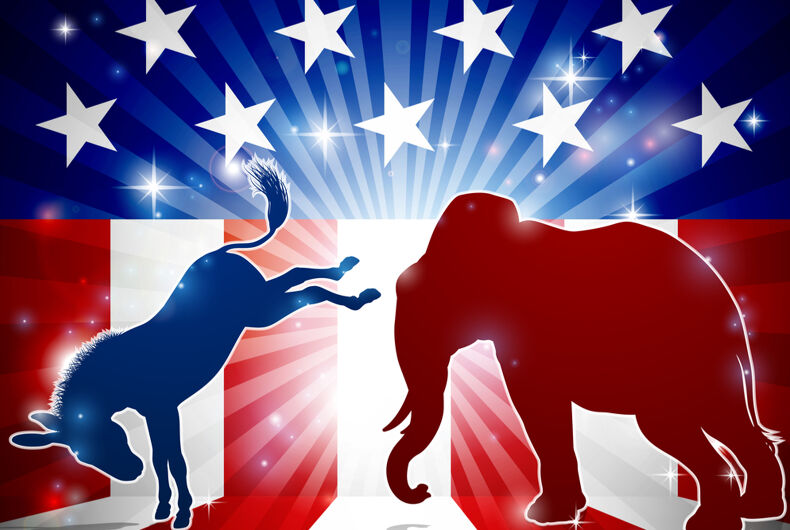 If incumbent Democratic Representative Dan Lipinski loses his primary race in Illinois, the House Republican caucus loses a vote, and the Democrats gain one.

It’s tempting to call Lipinski a “Democrat In Name Only” (aka, DINO). After all, he votes against his own party twice as much as the average congressional Democrat. His positions on the issues don’t exactly align with the rest of the party.

Lipinski steadfastly opposes women’s access to safe, legal abortion services. One of the few remaining anti-choice Democrats in Congress, he opposes stem cell research, and has a 100 percent rating from the National Right to Life Committee.

Lipinski opposes the Affordable Care Act. He was one of the few Democrats who voted against it.

Lipinski opposes LGBT equality. He voted against protecting LGBT Americans from employment discrimination and opposes marriage equality. In 2016, he supported a Republican “religious freedom” bill to allow businesses to discriminate against LGBT Americans.

Lipinski opposes the DREAM Act and even favored building a wall at the Mexico border. He also opposed raising the minimum wage.

Is it any wonder that Democratic leadership steered clear of Lipinski until last month?

Related: Why did Nancy Pelosi endorse an anti-LGBT candidate?

The Democratic Congressional Campaign Committee (DCCC) initially declined to endorse him. Democratic members of his own congressional delegation, like Reps. Jan Schakowsky and Luis Gutierrez, have broken with Lipinski, backing his primary challenger Marie Newman instead.

Running a campaign largely funded by small donations, Newman is now in a dead heat with Lipinski. A recent poll showed 43 percent of those surveyed back Lipinski and 41 percent back Newman. That’s a big jump for Newman, who was at 18 percent in an October poll.

Maybe Newman’s success is what got the attention of Democratic leadership. The DCCC recently reversed itself, and is now backing Lipinski. Even House Minority Leader Nancy Pelosi has endorsed Lipinski, despite Lipinski’s lack of support for her leadership.

Is the Democratic leadership worried about losing the seat if Lipinski loses his primary? That can’t be it.

It’s a solidly Democratic district that hasn’t elected a Republican for decades. Hillary Clinton carried it by 15 percent in the 2016 presidential election, and Bernie Sanders carried it in the Democratic primary. So it’s not a choice between Lipinski and an even worse Republican.

Besides, there isn’t even a Republican to elect if voters were so inclined. There’s no Republican candidate. Republicans weren’t even able to recruit a candidate. The only candidate for the GOP nomination is a local Nazi.

Related: Compare & contrast: Take a look at these two Republican politicians from Illinois

So why is Democratic leadership throwing its support with a guy who may have a “D” behind his name, but doesn’t necessarily vote with Democrats?

Up against a formidable challenge from the left, emboldened by the anti-Trump resistance, Lipinski has started warning Democrats against creating a “tea party of the left.” Could Democratic leadership be afraid that a loss for Lipinski could herald the kind of fringe-driven revolt Republican leadership faced?

As often as progressives have jealously wished that we had a tea party of our own, that’s not what’s happening here. Sure, high-profile Democrats are being primaried from the left, in a year when the party’s base is particularly motivated, but Democrats aren’t facing anything remotely like the uprising that the Republican establishment faced in 2009.

Let’s not confuse a movement with an irate mob. Sure, tea partiers moved their party further to the right. They unseated a few Republican incumbents with primary challengers from the right, and even cost the party some seats when their extremist candidates went down in flames. Still, they didn’t stop the GOP from retaking Congress and the White House.

Primarying conservative Blue Dogs in safely Democratic districts like Lipinski from the left doesn’t imperil a single Democratic seat in Congress. In a very real way, a loss for Lipinski could mean a real win for Democrats, if his challenger is elected.

Republicans would actually lose a vote on issues like immigration and equality, and Democrats would gain one with a member who finally votes with the rest of her caucus.

Rather than threaten the Democrats with their own “tea party,” the movement to unseat right-leaning Democrats like Lipinski moves the party to the left, while strengthening the Democratic voting bloc in Congress.