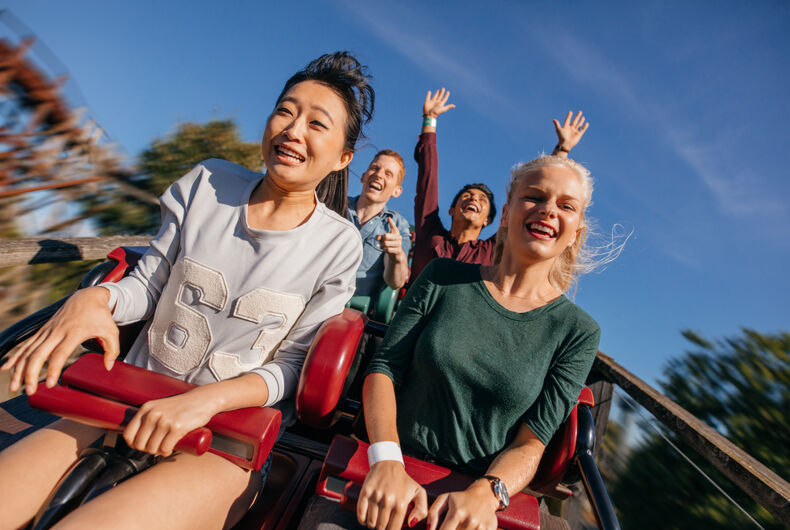 Imagine a land that has existed since the beginning of time. At some point, a mysterious gateway opens leading to a parallel universe oddly distinct from the one it veered from and left behind.

No, this is not the fictional scenario depicted in the new Starz series, “Counterpart,” starring Academy Award winner J. K. Simmons. Rather, this alternate dimension, with its terrifying rollercoaster trajectory, comes from the distorted imagination the former reality TV celebrity a microscopic minority of the overall electorate has thrust on us.

We now are strapped into this topsy-turvy cable ride where all perceptions are out of sync, where previous conventions have been thoughtlessly discarded, where truth is now false and common decencies are not so common any longer, and where the term “unprecedented” no longer holds any meaning.

Along the route of this carnival ride, Trump has hung posters with his large orange head blaring that Mexicans are criminals, drug dealers, and rapists; Muslims are out to kill us and take over the world; women are play things and their pussies are for grabbing, especially if one is famous; spousal abusers and men who go after teenage girls are good people to be supported, as are some white supremacists and neo-Nazis; black athletes are sons of bitches; all Haitians have AIDS while Nigerians all live in huts and Puerto Ricans are lazy and ungrateful; and the continent of Africa is composed of shithole countries.

In this Trump-contrived reality show, conservative Christian Evangelicals give the leader “mulligans” for actions they gave excommunications and exorcisms in that other previous dimension not-so-distantly passed.

No separation of powers between the Trumpian-dominated Congress and the very very very White House function to limit the effects of the deep potholes of crumbling infrastructure on our current path. No conflicts of interest can exist between this president’s business ventures and his duties as chief executive. In fact, the once cherished Constitution of that other place in time sits on a cold shelf in a dark closet gathering dust.

The nation’s intelligence agencies are now completely incompetent and unnecessary, while Russia stands as our most trusted and closest ally. Trump has no need to take daily intelligence briefings, or, in fact, any intelligence briefings at all. Reading, preparing, or any type of learning whatsoever are no longer necessary in conducting the important work of the most powerful person in this alternate world.

White men charged with abuse and violence of women deserve “due process” before we jump to judgment, but we must “lock Hilary up.” We must give the death penalty to the young black and Latino 14- and 15-year-old males of “The Central Park 5” who were later unequivocally exonerated for the crime to which they stood accused and to whom the President thinks require no apology.

The country’s service members and the Memorial Wall stationed at CIA headquarters function as mere props in the Commander in Chief’s propaganda arsenal. Distortions, misstatements, deceit, and blatant lies are the new truths.

White House press briefings serve as the means by which the Press Secretary, Sarah Huckabee Sanders, twists and spins herself into a pretzel right before us to explain this surrealist planet we now inhabit.

But as all rollercoasters are at risk for cable snap lunging its riders forcibly to the hard pavement to certain injury and potential death, likewise all who have been taken on this Trumpian ride stand and fall at ever increasing risk of perpetual erosion and decay to the body politic.

That is until we continue in our attempts to decouple our ride cars and head toward some semblance of stability by demonstrating and by entering the voting booths whenever and wherever given the chance.

Tom Daley & Dustin Lance Black are having a baby!