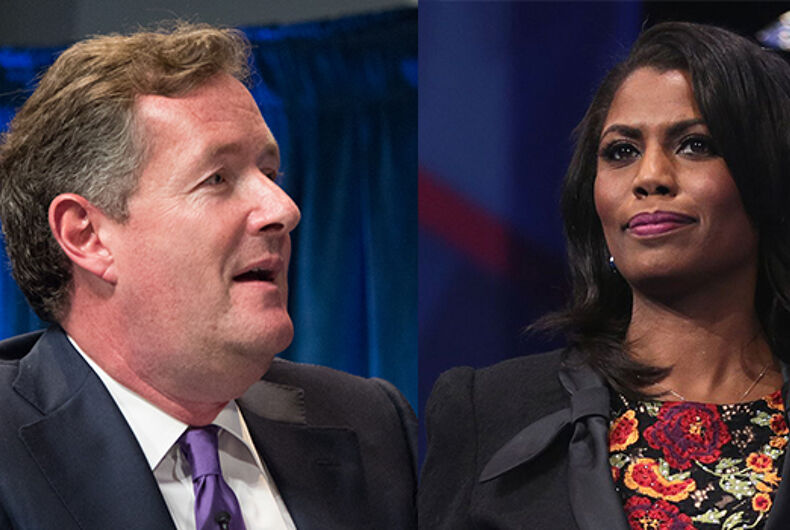 Piers Morgan has accused Omarosa Manigault-Newman of calling him an antigay slur when he rejected her sexual advances, and he is very very offended.

Morgan made the claim in an article for the Daily Mail, provocatively titled “The wife-beater, the witch and the White House: Why the hell did Trump ever tell Rob Porter and Omarosa ‘you’re hired’?”

*NEW: Omarosa offered me sex to win Celebrity Apprentice, then called me a 'f***ing f*gg*t', invented gay smears & threatened to punch me.
Why the hell was this vile creature ever employed at the White House? https://t.co/HyxnSWyBLZ pic.twitter.com/UbXQzDX1Tj

The TV host, who has previously spoken out in defense of the Trump administration, claimed he had “never met anyone quite so relentlessly loathsome as Omarosa; a vicious, duplicitous, lying, conniving, backstabbing piece of work.”

The pair both appeared on the first season of The Celebrity Apprentice and Morgan claims the trouble started early, with Omarosa suggesting they have a “showmance,” and when he rebuffed her, things got ugly:

‘Piers, do you want a showmance?’ ‘A what?’ I replied. ‘A showmance. You know, a romance on the show – we get it on together. Happens all the time on Apprentice. Everyone has sex together. Then we can make lots of money out of it.’ I stared at her grasping, ferociously ambitious little eyes, and laughed: ‘You must be joking, you deluded woman.’ She didn’t take it well. ‘What are you? Gay?’

From that moment, she turned on me like a viper.

I can honestly say I’ve never been spoken to in my life like the disgusting, foul-mouthed, homophobic way Omarosa spat at me throughout the weeks of filming.

Because I’d rejected her revolting sex plot, she decided the best line of attack was to repeatedly question my sexuality in the most crude and offensive manner imaginable.

At the time, I was separated from my ex wife, and mother of three of my four children – a fact Omarosa seized on with glee.

‘The mother of your children hates you Piers,’ she giggled on camera one morning, ‘and your children f**king hate you, they’re embarrassed by you. Is there another man raising your children?’

(None of these things was true)

Morgan likes to play the victim when it suits him, like when he got apoplectic about a cartoon of himself and Donald Trump getting rather…close, but has also showed himself to be less than sensitive to the LGBTQ community himself with past statements.

And why the need to stress that it’s not true in an aside? Looking at his views, it’s not surprising he would take special offense at being called gay.

Last year, author and journalist Benjamin Myers claimed that while he was an intern at News of the World, Morgan tried to use him to frame a gay youth group for supposedly being a hotbed of pedophilia. Myers said that when he informed Morgan that there was no “there” there, Morgan continued to press him.

“No, no, no, I said. They’re good people. Really nice. Well-meaning,” Myers wrote on Twitter of the conversation the two had when he returned from his reconnaissance mission. “You’ll have to go back next week, I was told. There must be something shady going on. We’ll find something. Don’t you worry. We’ll find something on them.”

There is certainly evidence that Morgan was willing to sink low to get the story during his time editing the Rupert Murdoch owned tabloid. He has admitted to running stories with full knowledge that the information was gained through phone hacking.

More recently, Morgan came in for criticism for his interview with Caitlyn Jenner, where he asked her how her “physique” has changed from “now to what it was like then,” while pointing at a figurine of Jenner during her Olympic years.

“Of course, certain areas we know,” he added.

Jenner began to answer the question before cutting herself off to note that what he had said was offensive.

“See, you made a comment there, and that’s why you would get in trouble, okay? You just said, ‘Oh, certain areas.’ That, to a trans person, is disrespectful,” she told him.

What does it take to get off the Trump rollercoaster?

Trump Jr. is trying to tarnish Rippon as the latest ungrateful minority athlete