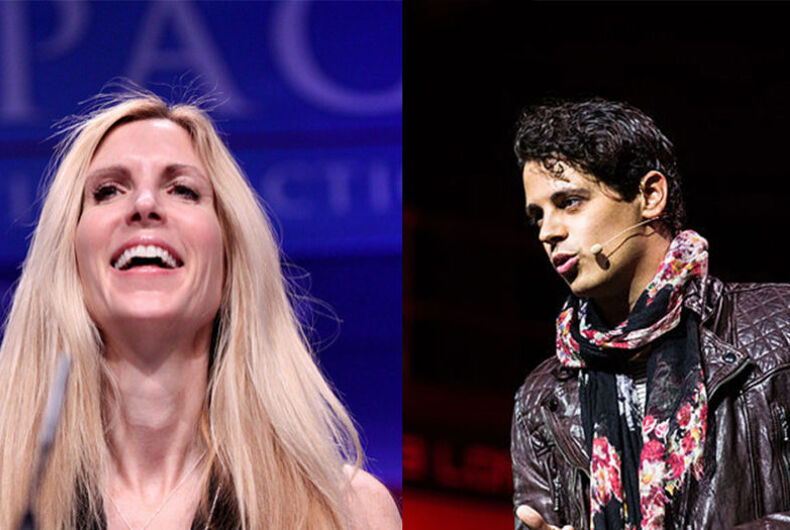 After Ann Coulter canceled an appearance at the University of California Berkeley last year, when the school changed the date of her appearance, the Berkeley College Republicans (BCR) sued the university, arguing that their free speech rights were violated.

And now the Department of Justice says it will file a Statement of Interest in support of the college Republicans.

The issue involves an invitation that the BCR extended to Coulter to speak on campus on April 27, 2017. Administrators say that campus security wasn’t consulted before the BCR signed a contract. For security reasons, the school wanted to move her speech to another building, but it wasn’t available that day, so they offered to host her on May 2 instead.

So Coulter threw a hissy fit on Twitter and canceled her speech.

The BCR sued, arguing that this incident, as well as one involving Milo Yiannopoulos, shows that they were the victims of discrimination “through the repressive actions of University administrators and campus police,” which violates their First and Fourteenth Amendment rights.

Yiannopoulos was invited by the college Republican group. The university canceled the planned speech by the former Breitbart editor, “amid violence, destruction of property and out of concern for public safety,” according to a campus spokesperson.

His talks have included encouraging students to out their undocumented classmates to U.S. Immigration and Customs Enforcement, and have been advertised on campuses with posters including an anti-transgender slur.

Trump tweeted out criticism for the university’s decision to cancel the speech.

If U.C. Berkeley does not allow free speech and practices violence on innocent people with a different point of view – NO FEDERAL FUNDS?

Associate Attorney General Rachel Brand said she will file a Statement of Interest in the case, supporting the BCR’s arguments.

The press release for the Statement of Interest links to an op-ed Brand wrote that was published by Fox News (of course), where she argues that seemingly neutral policies about campus security are easily transformed into discrimination against conservatives.

“The net result of these policies has been a narrowing of the views expressed on campuses and therefore the range of views students hear,” Brand wrote. “The heart of a university education used to be exposure to a wide range of ideas and the opportunity to debate their merits in order to inform one’s own positions and learn to articulate them persuasively.”

The way Brand talks about campus speech bears no semblance to reality.

Firstly, colleges engage in viewpoint discrimination all the time. Some ideas are better than others in the context of academia, and the entire point of getting an education is to learn the correct ideas, not the incorrect ones.

Further, students can access Coulter’s and Yiannopoulos ideas by looking up their online columns or buying their books. Brand writes as if students are in a hermetically sealed environment in which they engage in debates and listen to lectures all day. In reality, students learn a lot through reading and hard work, and they’re connected to the world through the media. Why should the school spend limited resources to present ideas that students can already easily find?

Lastly, people like Coulter and Yiannopoulos really don’t belong on campus. They don’t have new, interesting ideas that they arrived at through careful research. They weren’t going to discuss any extraordinary experiences that might have given students a unique point of view.

They aren’t even all that persuasive – their job is to sell books to people who already agree with them.

The Statement of Interest betrays conservatives’ deep hatred of education and learning. Not every fact is correct, it takes years of education to have something worth teaching to college students, and the media isn’t a substitute for an education.

And a physically safe, inclusive, and calm campus is more important for learning than seeing a TV star perform a live act.

Conservatives are systematically hostile to 14th Amendment discrimination claims. When the left talks about government discrimination in issues like voter ID laws and stop-and-frisk, the right immediately points to the neutral text of the law and says that that’s enough to prove that there’s no discrimination.

The fact that they’re using arguments that they usually hate to advance their agenda shows that, for them, it’s not a free and informed debate. It’s a power struggle.