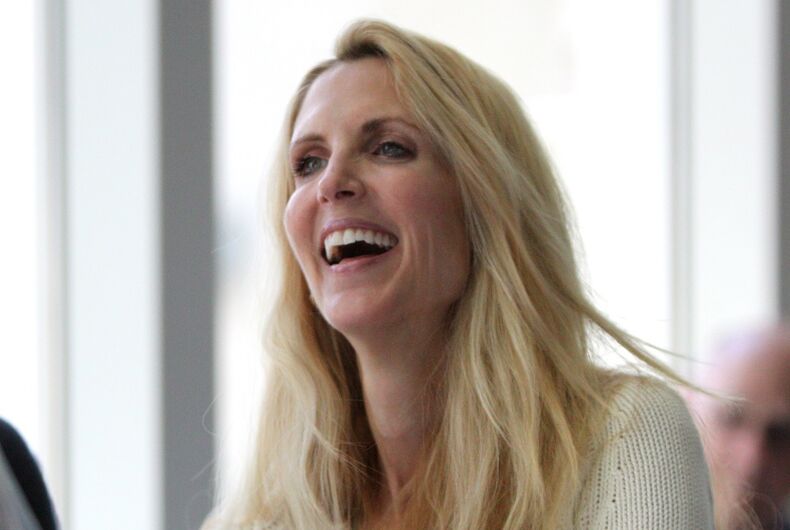 Ann Coulter has canceled her appearance at the University of California at Berkeley, but don’t worry about “free speech.”

The Berkeley College Republicans (BCR) invited her to speak but didn’t consult with the university about security issues first, which meant that police were not able to advise them on the most appropriate venue for the event.

The university, concerned about student safety after several violent confrontations on campus this year between “outside groups,” changed the date of her appearance for a time when an indoor venue would be available – earlier in the day, and during a week when fewer students are on campus. These sorts of time, place, and manner restrictions on speech are constitutionally acceptable, but the BCR sued the university anyway.

The university’s response to the suit was not surprising to me, since my entire adult life I’ve heard nothing but whining from college Republicans about their free speech even though no one is oppressing them (by definition, since the entire point of the conservative movement is to maintain the power and privilege of non-oppressed peoples):

This semester, UC Berkeley has dedicated more resources — in the form of staff time, administrative attention, police resources and cash outlay — to facilitating BCR’s expressive activities than have been devoted to any other student group in memory. Dedicated staff and administrators have spent countless hours, including during weekends and vacations, working to enable BCR’s planned events and to maximize the possibility that those events can occur safely for the participants, the speakers, our students and others in our campus community.”

Coulter already has a syndicated column, frequent television appearances, and several decades of books, so any Berkeley student who wanted to be exposed to her ideas could find them very easily. Still, she insisted that she was going to be on-campus at the earlier date that the university didn’t agree to, because the First Amendment apparently requires that she be able to deliver cliché and un-researched arguments at any time and in any venue that she wants.

Coulter told the New York Times yesterday, “Even the most lefty, Coulter-hating judge would probably have had to order Berkeley to let me speak.”

Well, it turns out that the exact opposite happened: even the most whiney, rightwing student organization understood that there were practical concerns here.

The Young America Foundation, a conservative youth organization that had been helping the BCR with their legal process, said in a statement, “Young America’s Foundation will not jeopardize the safety of its staff or students.”

Of course, Coulter could still speak in Berkeley, California. All she would have to do is get a box, put it on a street corner, and start shouting. Or she could make a sign and start marching.

You know, like a person who is actually concerned with getting their ideas heard and not just with getting paid.

Or she could have just waited a couple of days and used the facility that the university was willing to let her use. It’s still a bigger platform than most people will get in their whole lives, and people who actually want to get a hearing for their ideas would leap at the opportunity.

Universities have limited resources for outside speakers, and they should be using them in ways that actually promote a free exchange of ideas. Giving Coulter another platform does nothing to accomplish that – anyone can find out what she thinks on any particular topic.

And priority should be given to people who are doing serious work of interest to academics. Universities are defined as much by the speech they don’t allow as by the speech they do allow; this is why a student who doesn’t study the whole semester can’t claim that their free speech was violated when they fail the final exam, or why a professor whose academic work is rejected by a journal can’t claim that their free speech was violated but must instead try to improve that work.

Because the bottom line is that Coulter doesn’t have any original or new ideas to present. Coming up with new ideas is hard work, and that’s the kind of work that universities are engaged in. Coulter just wants money, which is much easier to come by in the entertainment business.

Really, it’s the BCR that should be ashamed by their utter lack of seriousness.

Why is the Albuquerque public school system tweeting about LGBTQ rights?