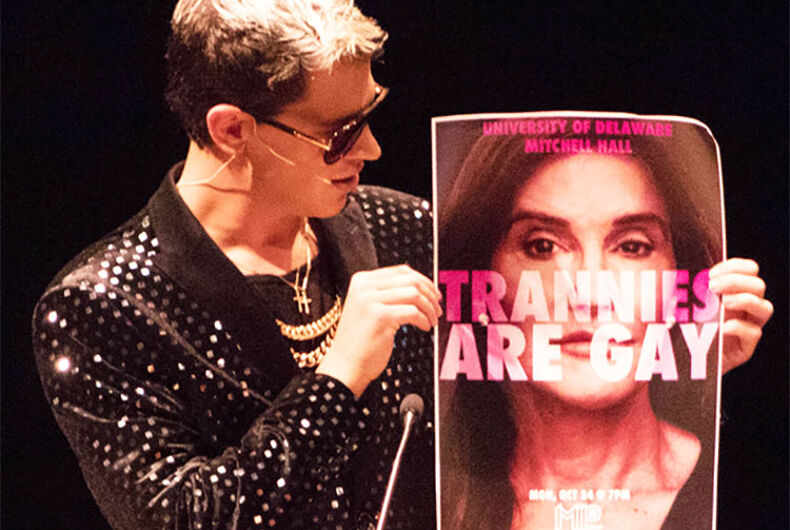 Warning: if you are reading this at work, you might want to find a private place to do so, and be further warned that what follows is so offensive you might find it objectionable. You should. We report on Milo Yiannopoulos not to give this nemesis the further attention which he so brazenly craves or to generate clicks for his evil campaign, but to call him out, oppose his actions and words, and add to the evidence on record that he is in fact a hatemonger.

Breitbart’s out, loud and vehemently anti-transgender stooge Milo Yiannopoulos — who has been banned from Twitter for trolling actress Leslie Jones, whose flattering profile in a gay magazine sparked a petition by LGBTQ journalists —  is currently on the road to promote his hate-filled agenda.  He calls it his “Dangerous Faggot Tour,” proclaiming himself to be a leader of a traveling “safe space for truth, justice, and the American way.”

But before he can don his blue tights and red cape, let’s be clear: Yiannopoulos is in fact a super villain to the LGBTQ community who is publicly crusading to exclude transgender Americans as worthy of any of those qualities: not truth, not justice and certainly not the American way.

His far-right, conservative, anti-LGBTQ rag of a website, Breitbart, published a transcript of his recent visit to the University of Delaware. Although he was invited by the College Republicans group on campus, the group claims it had no prior knowledge that his address would be an anti-trans rant, titled, “Trannies are Gay.”

Among the highlights: that it was time for the LGBQ community to drop the T, and not include transgender Americans in its activities; that transgender individuals are mentally ill; that the high suicide rate is proof of mental illness; he heaped praise on anti-trans activist Dr. Paul McHugh; he repeatedly used the slur “trannies” in his address.

The college group posted an apology on its Facebook page following the speech.

After the link below, you can click to the next page to read the full text of the address by Yiannopoulos as reported by Breitbart.

Homocons raise money for ‘Gays For Trump’ billboards in Orlando and N.C.