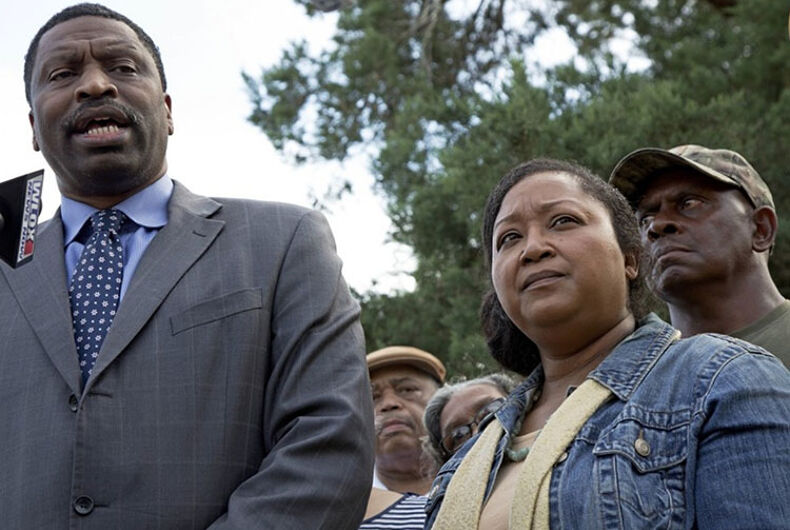 Mississippi — a state where racial division and intolerance runs so deep, its flag is the last one in the nation to still include the Confederate battle emblem — is at the center of yet another apparent hate crime, this time at a high school where the population is 72 percent white.

A black junior varsity player says as many as four white students put a noose around his neck during football practice, “pulled the noose tight” and “yanked backward,” according to the NAACP.

“No child should be walking down the hall or in a locker room and be accosted with a noose around their neck,” Johnson told reporters at a news conference Monday. “This is 2016, not 1916. This is America. This is a place where children should go to school and feel safe in their environment.”

Although the unnamed sophomore wasn’t present, his parents stood by Johnson’s side at the news conference but didn’t speak. LGBTQNation is not publishing their names so as to protect the identity of the alleged victim.

According to the NAACP, the students involved in the alleged attack are not being expelled, although one has not played on the football team since that incident. The group claims school administrators failed to report the incident to law enforcement officials. The organization also claims administrators have not told the victim’s parents what disciplinary action will be taken against the students.

“They failed to protect this student throughout this ordeal. Allowing students to commit blatant hate crimes without severe consequences, sends a message to students that their safety and well being are not valuable enough to be protected,” the NAACP said in a news release.

Johnson claimed the boy’s mother said she was advised against filing a police report because the father of one of the alleged white assailants is a former law enforcement officer. Sheriff’s Captain Ray Boggs told The Clarion Ledger that’s not true. He said he told the mother that pursuing criminal charges could result in repercussions and hard feelings among students that could in turn make her son’s life harder at school.

Although the sheriff’s office said the teens involved would face justice in a juvenile court, Johnson wants the teenagers charged as adults, which the newspaper reported is possible in certain situations for people between ages 13 and 16.

Watch a report from the Associated Press below:

UPDATED: Justin Timberlake’s voting selfie may land him in jail for 30 days

What Milo is up to now is so outrageous and offensive, you’re likely to get mad