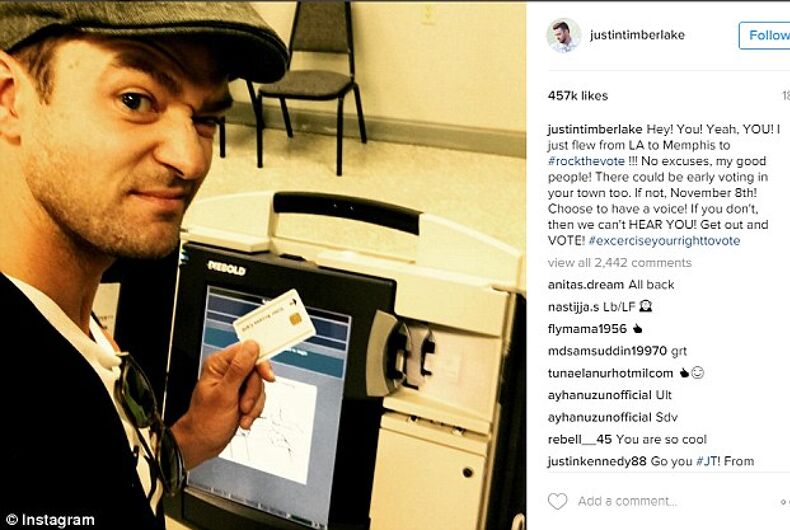 UPDATE: TMZ reports that the Shelby County District Attorney’s Office who said they were looking into a possible criminal violation in connection with Timberlake’s voting selfie is now walking that statement back. While the D.A.’s office is aware of the picture, as of now no one is investigating the incident and the source now says he should not have claimed it was “under review.”

Justin Timberlake shared a picture voting on Instagram to encourage others to vote as well and is now facing the possibility of spending 30 days in jail  for his efforts.

Timberlake flew from Los Angeles to Memphis to cast his ballot, and in Tennessee, as in several other states, it is illegal to take photographs or record audio in a voting booth. In addition to the punishment of 30 days incarceration, the crime carries a $50 fine. The law was passed last year but so far no one has been prosecuted under it, which would make Timberlake the first if authorities decide to take action.

A representative from the Shelby County District Attorney’s office told TMZ they are reviewing the situation.

Federal judges have struck down bans on selfies in New Hampshire and Indiana, and rules have been changed in places like California and Rhode Island, but in many states it’s still a violation that carries potential fines or jail terms.

There are laws against sharing any photo of your ballot in 18 states, while six other states bar photography in polling places but do allow photos of mail-in ballots, according to a review by The Associated Press.

They have also compiled a handy guide of each state’s laws regarding the issue, so you can avoid landing in the same hot water Timberlake is in right now.

This adorable couple of 50 years want you to vote! Meet Lennie and Pearl