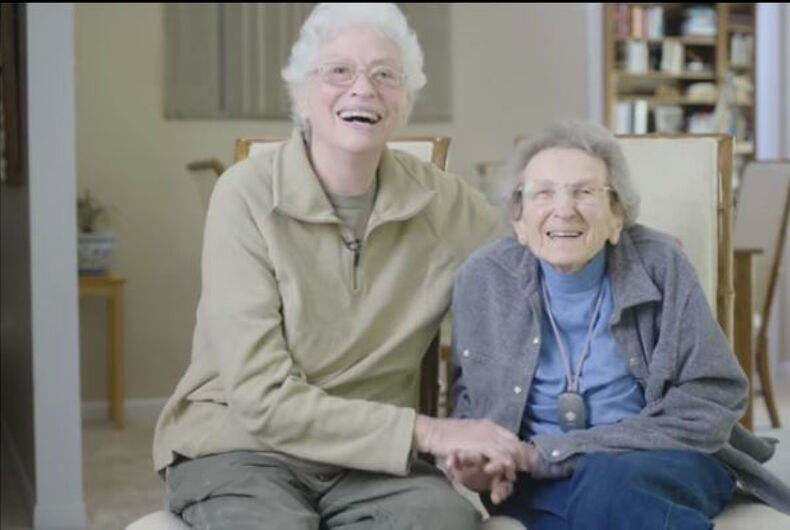 In what may well be the sweetest get-out-the-vote ads you ever see, a lesbian couple of over 50 years — Lennie Gerber and Pearl Berlin — talk about what is at stake in this election, as well as steal our hearts with their obvious love and affection for one another.

“We just do [love each other], we are in love and we tell each other that every day,” Gerber says.

The couple live in North Carolina, having moved there together in the 1970s, and fought for the right to marry, challenging the state’s constitutional amendment defining marriage as only between a man and woman. They wed as soon as they were legally able.

Gerber says she still can’t believe that they were finally able to get married in their own community.

“It’s just amazing… We are so lucky,” she says.

But she adds that “we have a lot to worry about in this election.” Donald Trump has voice support for appointing Supreme Court justices in the mold of antigay Antonin Scalia, and has said he is in favor of overturning same-sex marriage.

He also supports the First Amendment Defense Act (FADA), which would legalize anti-LGBTQ discrimination across the country. His anti-LGBTQ advisers recently cost him the support of the Log Cabin Republicans.

“Who am I voting for?” Berlin responds when asked off camera. “Why would you even ask?” she adds, laughing.

“It’s well past time for America to have a woman president,” Gerber says.

“92 birthday coming up. If Hillary is sitting in the White House, I shall be very happy,” Berlin agrees.

Gerber also speaks out against the discriminatory law HB2, which has cost North Carolina millions of dollars and thousands of jobs.

Gov. McCrory, who signed HB2 into law, is in a tight race with challenger Attorney General Roy Cooper, who opposes the bill.

“The prejudice that still exists is very sad to me. I had thought we had gone beyond that. HB2 is totally unconstitutional,” Gerber says.

The ads are produced by the Human Rights Campaign and Equality North Carolina, as part of their TurnOUT NC initiative, and are titled “Voting” and “Lennie & Pearl Support Hillary Clinton.”

“Lennie and Pearl’s story is an inspiration to anyone who believes in the American promise of liberty and justice for all,” said HRC President Chad Griffin in a statement. “Because of Lennie and Pearl, and thousands of other pro-equality voters, North Carolina has the historic opportunity to elect Hillary Clinton, the first woman president, and to send Roy Cooper to Raleigh to repeal HB2.”

Watch the videos below.

Lennie and Pearl on the importance of voting

Lennie and Pearl on supporting Clinton

Watch it below to learn more about their moving love story.

Jerame Davis: The best reason why you shouldn’t vote for Donald Trump

UPDATED: Justin Timberlake’s voting selfie may land him in jail for 30 days