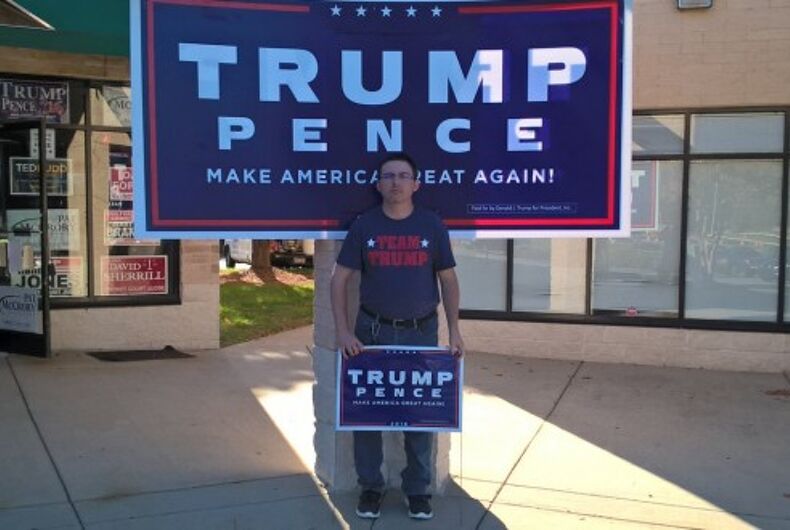 A gay couple in North Carolina supporting Donald Trump for president are raising money to put up billboards across the swing state, as well as one in Orlando. So far more than $2,800 of the $6,000 goal has been raised via GoFundMe.

Peter Boykin says his husband, who was recently kicked out of a Trump rally for assaulting a protester, came up with the idea. The protester, for the record, has since forgiven his attacker in an open letter in which he said that he would not be pressing charges.

“North Carolina is a battleground swing state, if we can win here it will signal Trump is winning,” Boykin writes on the GoFundMe page. “The Billboard will mainly say TRUMP 2016 and underneath say sponsored by supporters of GaysforTrump.org.”

Boykin had a “Gays For Trump” booth at this year’s NC Pride event.

His goal is to have the billboards up from Nov. 1-8.

In a video posted to Twitter on Saturday he said he wanted the first billboard to go up in Orlando near Pulse, the LGBTQ nightclub where 49 people were killed and dozens wounded.

The Log Cabin Republicans recently announced that they would not be endorsing Donald Trump due to his surrounding himself with antigay advisers, and only 20 percent of LGBTQ voters are supporting him according to recent polling.

That said, some gay Republicans are, like Boykin, standing firm in their support of the Republican candidate.

What Milo is up to now is so outrageous and offensive, you’re likely to get mad

Mormons: Being gay isn’t a sin, but being in a same-sex relationship is