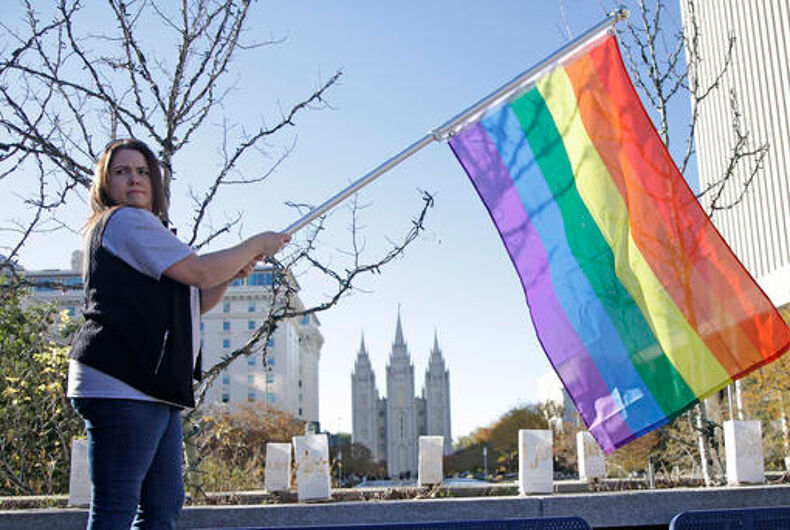 FILE - In this Nov. 14, 2015, file photo, Sandy Newcomb poses for a photograph with a rainbow flag as Mormons gather for a mass resignation from the Church of Jesus Christ of Latter-day Saints, in Salt Lake City. Photo: (AP Photo/Rick Bowmer, File)

SALT LAKE CITY (AP) — Mormon leaders told gay and lesbian members Tuesday that attraction to people of the same sex is not a sin or a measure of their faithfulness and may never go away, but reminded them that having sex violates fundamental doctrinal beliefs that will not change.

The newly unveiled “Mormon and Gay” church website includes articles, teachings, videos and stories from church members who identify themselves as gay and lesbian. It is a remake of a site first created nearly four years ago that marked the religion’s most significant outreach to gays and lesbians.

The website is designed to encourage compassion and acceptance for LGBT people and strike a softer tone on an issue that has led to criticism of the conservative Utah-based The Church of Jesus Christ of Latter-day Saints recently.

The Mormon church is one of many conservative faith groups staunchly upholding theological opposition to same-sex relationships amid widespread social acceptance and the U.S. Supreme Court’s decision legalizing gay marriage, while attempting to foster an empathetic stance toward LGBT people.

“There is no change in the church’s position of what is morally right,” church leader Dallin H. Oaks said on the website. “But what is changing_and what needs to change_is helping church members respond sensitively and thoughtfully when they encounter same-sex attraction in their own families, among other church members, or elsewhere.”

The website may seem “pitiful” to non-Mormons supportive of gay rights victories, but is a positive step for LGBT Latter-day Saints, said Kendall Wilcox, a gay Mormon man involved in church focus groups during the creation of the website.

The acknowledgment of the pain and conflict that gay and lesbian Mormons endure, is comforting and should help heterosexual Mormons better understand gay and lesbian experiences, Wilcox said. Mormons who are in same-sex relationships are considered apostates, and can be excommunicated.

But the church fell short by focusing exclusively on gay and lesbian LGBT Mormons who are not in same-sex relationships so they can maintain full-fledged church membership, avoiding mention of gay Mormons who try to maintain a connection to the religion while relationships, he said.

“There are active church members who experience same-sex attraction and never choose to identify themselves using a label. Our primary identity will always be as a child of God,” the website says.

John Gustav Wrathall, in a relationship with his husband for 25 years and still attending Mormon church services in Minneapolis, applauded the tone of the website and the authenticity of the stories presented but said stories like his were missing.

“The loneliness and heartache that comes from being denied that kind of a relationship is very hard,” said Wrathall, president of Affirmation, a Mormon LGBT support group.

That was interrupted last year when the church adopted new rules banning children living with gay parents from being baptized until age 18, triggering outrage from members pushing for more acceptance.

L. Whitney Clayton and Von Keetch, members of the religion’s second-tier world leadership, told The Associated Press the doctrinal belief in marriage only between men and women is so fundamental to the religion’s salvation plan that it will never change though the faith believes in continuing revelation.

The website is intended to serve as a resource and provide hope for LGBT members, their families and friends, Clayton said.

The church acknowledges on the website that suppressing feelings about being attracted to the same sex can lead to shame and negative internal dialogue.

But it advises people to “prayerfully” consider who they tell if they decide to come out. The church also recognizes that feelings of same-sex attraction never go away for some people.

“Many people pray for years and do all they can to be obedient in an effort to reduce same-sex attraction, yet find they are still attracted to the same sex,” it says. “A change in attraction should not be expected or demanded as an outcome by parents or leaders.”

That message and a tip sheet for parents encouraging them to be understanding and loving when children come out as gay are steps in the right direction, said Erika Munson, a heterosexual Mormon and co-founder of the Mormons Building Bridges support group.

“It’s a nice counter to the ‘You can pray the gay away,'” Munson said. “You hear that less and less in Mormonism but it’s still a big part of our culture.”

© 2016, Associated Press, All Rights Reserved.
This material may not be published, broadcast, rewritten, or redistributed.
News
Church of the Latter Day Saints, Mormon Church, Mormons

Homocons raise money for ‘Gays For Trump’ billboards in Orlando and N.C.