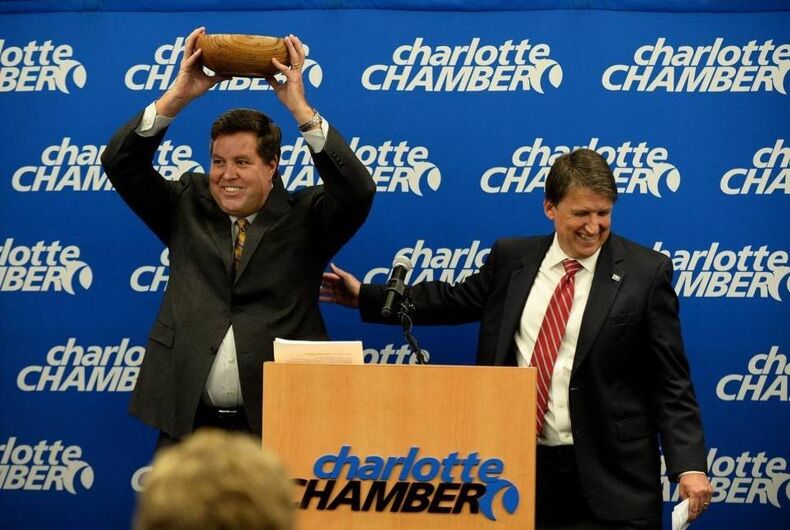 John McCabe, left, senior vice-president of Global Operations at PayPal, holds up a carved wooden bowl (made by an artist from a tree struck by lightning outside the state capitol), presented to him by Gov. Pat McCrory, right, after McCrory announced that PayPal, Inc. will open a Global Operations Center in Charlotte. PayPal canceled its plans for the expansion soon after House Bill 2 was passed. Photo: Diedra Laird (Charlotte Observer/via AP)

CHARLOTTE, N.C. (AP) — North Carolina has struck back at PayPal for canceling a planned expansion in the state to protest a law limiting protections for LGBT people.

The government demanded its bowl back.

The bowl, made from an oak tree struck by lightning last year on the capital grounds, was intended as a welcome gift for companies coming to North Carolina, N.C. Commerce Secretary John Skvarla told the Charlotte Observer.

The state made about 340 bowls from the fallen oak. Other bowls have been given to CSX, which recently announced plans to open a new intermodal terminal in Edgecombe County, and Charter, which has the largest apprenticeship program in the state.

In March, PayPal announced plans to open an operations center in Charlotte that would have added at least 400 jobs. However, PayPal canceled the expansion days after the passage of House Bill 2, which requires people to use restrooms matching their birth certificates in schools and many public buildings.

CEO Dan Schulman said the law “perpetuates discrimination, and it violates the values and principles that are at the core of PayPal’s mission and culture.”

The state auctioned off the bowl for an unknown amount, Skvarla said. It’s unclear who owns the bowl now.

Mormons: Being gay isn’t a sin, but being in a same-sex relationship is