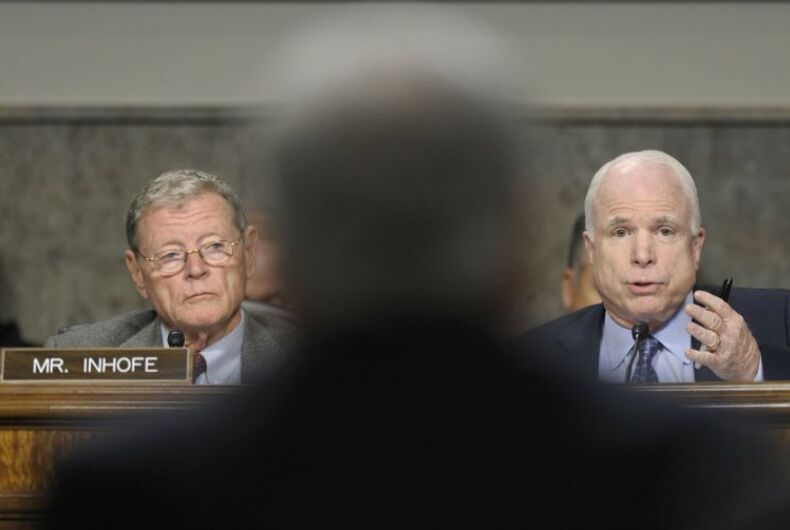 WASHINGTON (AP) — Senate Democrats are intent on scuttling a House-passed provision that they say would undercut protections against workplace discrimination based on sexual or gender orientation.

In a letter delivered Tuesday to the leaders of the Armed Services committees, the lawmakers called the measure dangerous and urged that it not be included in the annual defense policy bill. They said the provision would amount to government-sponsored discrimination by permitting religiously affiliated federal contractors to refuse to interview a job candidate whose faith differs from theirs and to fire employees who marry their same-sex partners or use birth control.

But Republican proponents of the measure have described the provision as a bulwark for religious freedom.

The provision is at odds “with the values and beliefs that continue to advance our great nation,” according to the letter, yet there is no overt threat in the letter to block the defense authorization bill if the measure is added.

“This discrimination erodes the freedoms that our military has fought for generations to protect,” the lawmakers wrote.

The House added the provision to its version of the defense policy bill. The Senate did not, leading to a standoff. The divide could threaten the timely approval of the defense legislation, which authorizes military programs for the new fiscal year that started Oct. 1.

Congress returns after the Nov. 8 election for a lame-duck session and will be under pressure to resolve differences between the two chambers and get a final bill to the president’s desk.

Sen. Richard Blumenthal, D-Conn., who organized the letter, said Tuesday that a filibuster of the legislation would be an option if the provision isn’t removed before the bill reaches the floor of the Senate. But he said he’d hoped for a resolution before then.

The letter, Blumenthal said, is “sounding an alarm” that shows how much opposition there is to the provision.

The provision would “vastly expand religious exemptions” under the Civil Rights Act and Americans with Disabilities Act to allow contractors “to harm hardworking Americans who deserve to be protected from workplace discrimination based on sexual orientation, gender identity, religious identity, or reproductive and other healthcare decisions,” the letter said.

The House provision was authored by Rep. Steve Russell, R-Okla., who said the provision is aimed at ensuring faith-based organizations that perform work for the U.S. government aren’t forced to act against their beliefs.

Ilyse Hogue, president of NARAL Pro-Choice America, criticized GOP senators who she said are trying to distance themselves from GOP presidential candidate Donald Trump for saying he would punish women for choosing abortion and for derogatory comments he made about women in the past.

“But in Washington, those very senators are trying to enact legislation that would use taxpayer funds to do just that — discriminate against and punish women, (LGBT) people, and others under the guise of religious liberty,” Hogue said.

Trump’s campaign later clarified his abortion comment, saying the doctor, not the patient, should be punished, a position that put him in line with anti-abortion activists.

One-fourth of US cancer deaths are linked to smoking