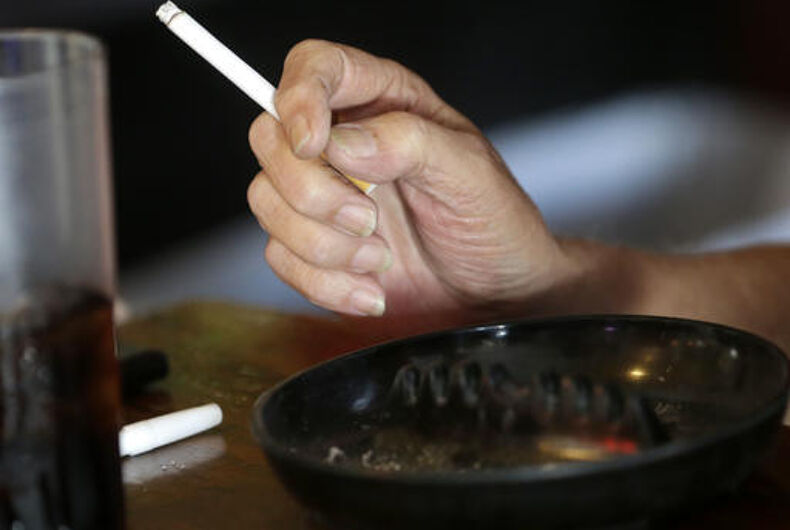 CHICAGO (AP) — Cigarettes contribute to more than 1 in 4 cancer deaths in the U.S. The rate is highest among men in Southern states where smoking is more common and the rules against it are not as strict.

The lowest rates were in Utah, where 22 percent of cancer deaths in men and 11 percent in women were linked with smoking.

“The human costs of cigarette smoking are high in all states, regardless of ranking,” the authors said.

They analyzed 2014 health surveys and government data on smoking rates and deaths from about a dozen smoking-linked cancers. Lung, throat, stomach, liver, colon, pancreas and kidney cancers were among those included, along with leukemia. The researchers estimated how many cancer deaths were likely attributable to smoking, and compared that with deaths from all cancers.

While U.S. smoking rates have been falling, 40 million U.S. adults are cigarette smokers and smoking is the top cause of preventable deaths, according to the federal Centers for Disease Control and Prevention.

The study found that at least 167,000 cancer deaths in 2014 — about 29 percent of all U.S. cancer deaths — were attributable to smoking. A government estimate based on different methods says 1 in 3 U.S. cancer deaths are linked with smoking, and the study authors acknowledge they may have underestimated the true burden posed by cigarettes.

The researchers say nine of 14 states with the least comprehensive smoke-free indoor air policies are in the South. The average cigarette excise tax in major tobacco states, mostly in the South, is 49 cents, compared with $1.80 elsewhere. The tobacco industry heavily influences these policies and most of the U.S. tobacco crop is grown in the South, the researchers said. The region also has relatively high levels of poverty, which is also linked with smoking.

Dr. Hilary Tindle of Vanderbilt University in Nashville, Tennessee, said the results reflect what she sees as a tobacco researcher and internal medicine specialist in the South. She was not involved in the study.

Smoking is more of a social norm there, and while her medical center has an indoor smoking ban, she said it’s not unusual to walk through cloud of cigarette smoke outside the entrance.

Tindle said the study results highlight the need for stronger tobacco control measures and show why doctors should discuss smoking at every patient visit, encourage smokers to quit and inform them about effective ways to do so.

© 2016, Associated Press, All Rights Reserved.
This material may not be published, broadcast, rewritten, or redistributed.
Health and Wellness
anti-smoking campaigns, LGBTQ smokers, tobacco use

Best one yet: Lady Gaga kills it on James Corden’s carpool karaoke