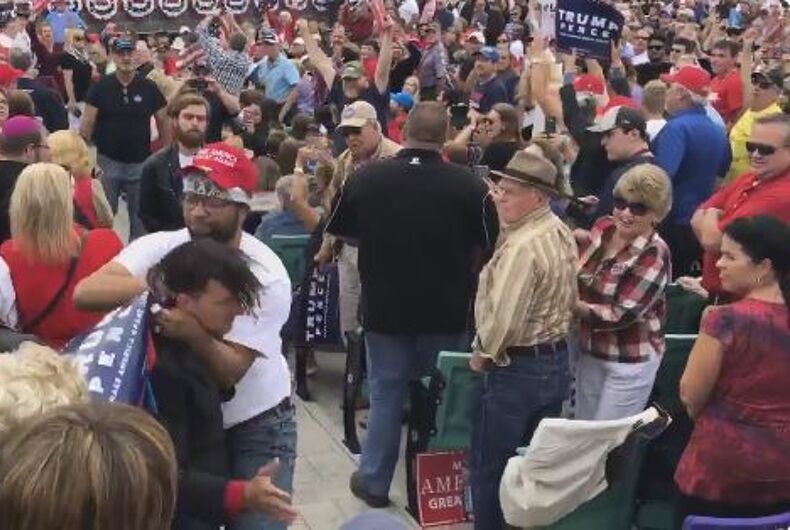 A Trump supporter in rainbow garb attacks a protester at a rally in Greensboro, NC. Photo: Screenshot, Twitter

Derek Dunham, the protestor attacked by a gay man during a Donald Trump rally in North Carolina last week, has penned an open letter to his assailant explaining why he won’t be pressing charges. Dunham was holding an American flag upside down near the stage when a man identified as homocon David Smith grabbed him in a headlock and began pushing him out of the venue.

“I attended the Trump rally knowing I did not support him. I vocally interjected a few times (only the first of these was acknowledged) and eventually chose to actually disrupt. I did so by walking down the aisle and when I got about 15 feet from Trump, I looked him in the eye and unfurled an American flag upside down,” Dunham told the local LGBT newspaper, QNotes.

Dunham cited the US flag code to point out that turning the flag upside down isn’t a sign of disrespect. Section A of the code reads, “The flag should never be displayed with the union down, except as a signal of dire distress in instances of extreme danger to life or property.”

Dunham says that Trump’s candidacy has put the nation in a time of dire distress.

“I understand your anger. I do worry it is misguided, and I suspect you had no idea that the way I was holding the flag was not in fact a sign of disrespect. It is a common misunderstanding that an inverted flag is an inherently anti-American symbol,” he writes in his letter posted to Facebook.

“I ask for you to consider opening your mind, and understanding the importance of accountability,” the letter continues. “If I were to hold you criminally accountable, the assault and battery charge would likely affect every interaction with law enforcement you have for the rest of your life. It would be even more difficult to find work, and your anger would likely become deeper. I hope this message of compassion does more to set you on a path where you may have made a different choice faced with a similar situation.”

Read the entire letter below along with footage of the attack.

This is an open letter to the man who assaulted me.Dear David Smith,I may never know why you chose to assault me…

Trump was interrupted by a protester in Greensboro and this happened: pic.twitter.com/Hzc2Z82gNu