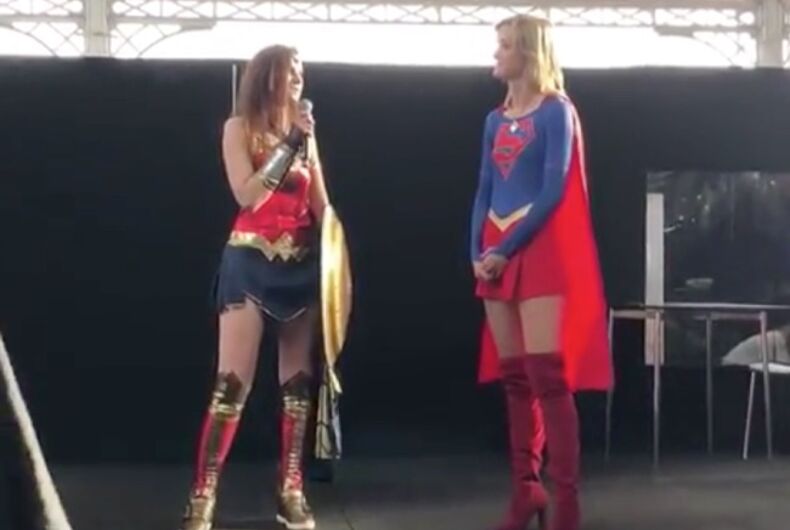 Wonder Woman and Supergirl get engaged at Paris Comic-ConPhoto: Instagram

Reinforcing the long-derided stereotype that comic books turn people gay, a queer couple in France just got engaged at a comic book convention.

It happened at Paris Comic-Con, one of the biggest geek/nerd/comic conventions in Europe. Video of the proposal went viral, though because it is in French, we’re not exactly sure what was said, or even the names of the couple. One girl dressed up as Wonder Woman, while the other donned a Supergirl costume. That’s good enough for us.

In the video, Wonder Woman says a few affectionate words on stage at the convention. As she speaks, a group of Star Wars cosplayers—including stormtroopers, Darth Vader and Rey—wander onto the stage because…of course they did. At that point, Wonder Woman passes the mic and her shield off to a nearby trooper and drops to one knee before her stunned girlfriend.

Supergirl stands there, frozen, as Wonder Woman produces a ring from somewhere in her armor. The crowd bursts into applause, and even Darth Vader joins in.

And folks, anything that can warm Darth Vader’s heart, deserves some applause.

Why is this lesbian trying to overturn marriage equality?

An urgent warning from a black elder: The new Jim Crow targets LGBTQ Americans too