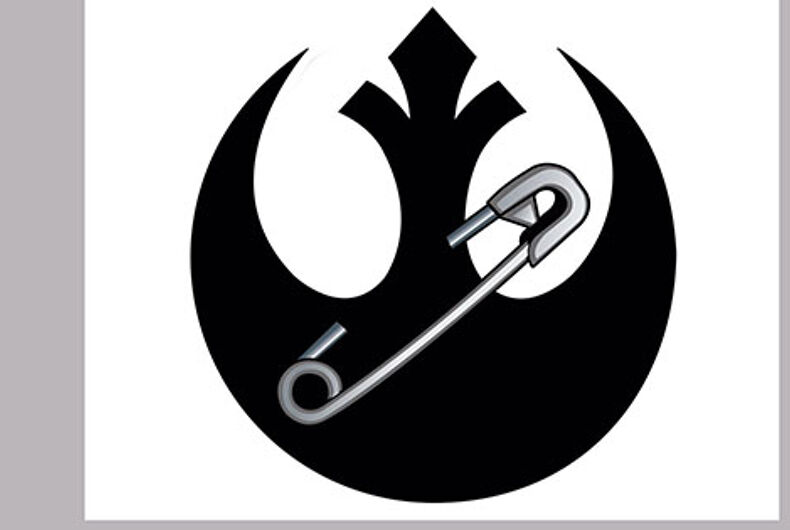 One week before the premiere of the much anticipated film, Rogue One: A Star Wars Story, the suits at Disney no doubt have a bad feeling about this: a boycott organized by Trump supporters in the same vein as the actions they’ve launched against Kelloggs, the “Hamilton” musical, and Starbucks.

So far since they won, the "we don't need safe spaces" party has boycotted a play, a cereal brand and a movie for being mean. #DumpStarWars

This latest boycott began just about a month ago, following the election of Donald Trump, when one of the Rogue One screenwriters publicly praised an article that compared the plot of the movie to the current political situation. Chris Weitz then tweeted:

“Please note that the Empire is a white supremacist (human) organization.”

Gary Whitta, the original writer on the film, responded with this tweet:

“Opposed by a multi-cultural group led by brave women.”

Actor Mark Hamill, who is and always shall be Luke Skywalker, and who has stated it’s entirely possible his character is gay, shared Weitz’s anti-hate message with his Twitter followers:

Hamill also told the Daily Beast, “If you look at what’s being assembled for our government it’s like, yikes. It’s a who’s who of really despicable people.”

Speaking of despicable, the president-elect’s White House chief strategist Steve Bannon himself made a case for the Trump-Empire comparison, in an interview with The Hollywood Reporter, saying “darkness is good:”

As complaints from the racist white supremacist element of America that calls itself the alt-right poured in, Whitta and Weitz soon deleted their tweets, but not before he and Weitz changed their Twitter avatars to that Rebellion logo with the safety pin. That, too, did not last, but the message was received, and Trump supporters started spreading rumors that following the election, the film’s ending had been reshot.

Neo-Nazis and white supremacists didn’t start hating on the franchise with Rogue One, of course. The actors cast in Star Wars Episode VII: The Force Awakens raised hackles, because John Boyega and Daisy Ridley landed the lead roles; Boyega is black, Ridley is a woman. Rogue One stars actress Felicity Jones in the lead role.

“They are brainwashing kids into hating white men,” one Reddit user whined. “All the villains are white and all the ‘good guys’ are minorities and women.”

“Pretty hard-pressed these days to find any form of media content that isn’t blatantly anti-White (or anti-Capitalist, for that matter),” posted another.

The haters’ boycott has inspired some to say it will only make their moviegoing experience better.

If Star Wars — an obvious allegory about Nazism — feels like an attack on your candidate, the problem isn’t with Star Wars… #DumpStarWars

Trumpcakes are boycotting Star Wars which means your chance of getting shot in the movie theater just decreased by 97%. Enjoy! #DumpStarWars

If #DumpStarWars people are mad that Star Wars is anti-Nazi, just wait until they learn about Indiana Jones, Casablanca & The Sound of Music

Rogue One: A Star Wars Story opens in select theaters Thursday and widely across the U.S. on Friday, December 16. Click below to watch the latest trailer from Lucasfilm and Disney:

Six months after massacre, Pulse to reopen for ‘Remembering Our Angels’ memorial