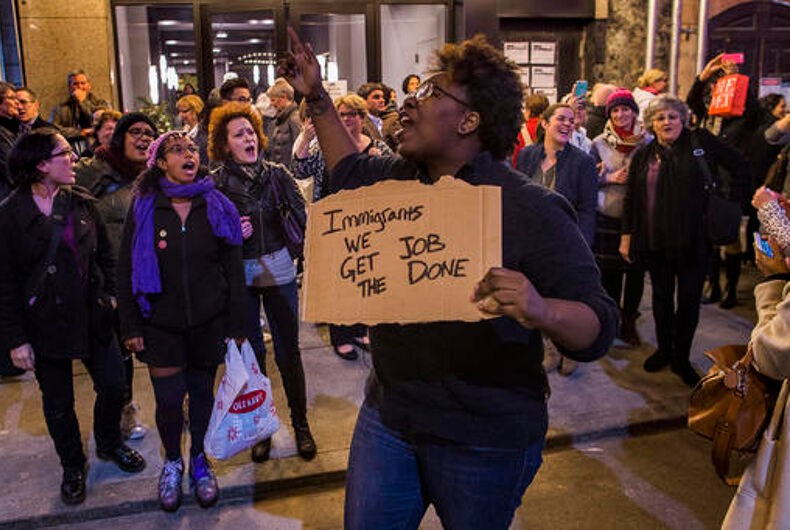 NEW YORK (AP) — President-elect Donald Trump demanded an apology from the cast of the Broadway musical “Hamilton” a day after an actor in the hit show delivered a pointed message about diversity to his running mate who was in attendance. The speech aimed at Mike Pence prompted angry responses from liberals and conservatives alike — underscoring yet again the fractious aftermath of the 2016 election.

The bitter back-and-forth came after the vice president-elect caught Friday night’s performance of “Hamilton” with his nephew and daughter. A mixture of boos and cheers could be heard inside the theater as Pence took his seat. When the show ended, Pence was asked by a cast member to hear a prepared speech after the curtain call from the multiracial and multicultural cast, saying it is concerned about the Trump administration.

“We, sir, we are the diverse America who are alarmed and anxious that your new administration will not protect us, our planet, our children, our parents, or defend us and uphold our inalienable rights,” said Brandon Victor Dixon, who plays Aaron Burr, the nation’s third vice president, as his fellow actors joined hands. “We truly hope that this show has inspired you to uphold our American values and to work on behalf of all of us.”

The unusual address quickly went viral and Trump on Saturday tweeted that it was “very rude,” arguing that Pence was “harassed” and theater “must always be a safe and special place.” He urged the cast to apologize. Dixon responded on Twitter that “conversation is not harassment sir” and added that he appreciated Pence stopping to listen.

Our wonderful future V.P. Mike Pence was harassed last night at the theater by the cast of Hamilton, cameras blazing.This should not happen!

Pence had ducked out before Dixon finished the unprecedented message but heard the full remarks from the hallway outside the auditorium.

Trump transition officials did not immediately respond to requests for comment. A representative for the show said none of the cast members would be available to speak Saturday.

Melissa Kremholz, of Indianapolis, the capital of Pence’s home state of Indiana, attended the show Friday night and was seeing it again Saturday afternoon. She said she could see how Dixon’s speech might be interpreted as impolite and gave Pence credit for coming, but backed the Broadway cast’s right to explain how uneasy many Americans feel.

“I think it was really important for them to speak what they had to say because the whole musical talks about how our country came to be and our American values and how our country was built on immigrants and people of all different backgrounds,” she said. “I think it’s really important that they actually spoke their minds and I think they did so very respectfully, too.”

The show’s official Facebook page was inundated with comments ranging from calling Dixon’s speech “disrespectful,” ”inappropriate” and “uncalled for.” Many threatened to not buy tickets to future performances. Tickets for the show are not available for another year; “Hamilton” is sold out through September 2017.

The American Civil Liberties Union weighed in on the side of the Broadway cast, saying the First Amendment is a cornerstone of America “even if it sometimes makes our leaders uncomfortable.”

“President-elect Trump needs a refresher on his high school civics class. Americans don’t apologize — not even to presidents or vice presidents — for the lawful and proper exercise of their constitutional rights,” ACLU Executive Director Anthony D. Romero wrote in a statement.

Americans don't need to apologize-not even to presidents or vice presidents-for the lawful & proper exercise of their constitutional rights. https://t.co/daN147yjkM

But Noel Leifer, from Manchester, New Jersey, who was in line to see a matinee Saturday with his wife, Peggy, said he understood why so many people felt that actors lecturing the next vice president from a Broadway stage were somewhat impudent.

“It was a protest. It was a bit disrespectful. They are going to be the leaders of the country. I didn’t vote for them — I think they’re poor candidates — but they’re still going to be leaders,” said Leifer, who was celebrating his wife’s birthday with tickets he bought a year ago.

As for a boycott of the show, he didn’t think that would ultimately fly. “I don’t think too many people who have spent the money for this show are going to boycott it just to make a protest statement.”

The musical is by Lin-Manuel Miranda, who wrote the story, music and lyrics. It stresses the orphan, immigrant roots of first U.S. Treasury Secretary Alexander Hamilton and has a terrifically varied score, ranging from pop ballads to gospel to sexy R&B. It has been cheered for reclaiming the nation’s founding story with a multicultural cast.

Miranda, in a tweet, said he was “proud” of Dixon and the “Hamilton” cast “for leading with love,” before reminding people that everyone is welcome at the theater.

Proud of @HamiltonMusical. Proud of @BrandonVDixon, for leading with love.
And proud to remind you that ALL are welcome at the theater.

Miranda had been a big booster for the failed presidential campaign of Hillary Clinton, including performing at an all-star fundraiser for her last month. The cast also put on a special “Hamilton” show at a Clinton fundraiser last summer.

Many in the Broadway community quickly defended the actions of the “Hamilton” cast, including new Tony Award-winner Cynthia Erivo, who mocked: “You want the theater full of people you have alienated to be protective of you?” And Josh Gad, a Tony nominee for “The Book of Mormon,” wrote: “I know the booing upsets some of you. But this is what happens when you run on a platform of hate.”

Janise Gray, of Union, New Jersey, who saw the show Saturday afternoon, considered the speech an anguished cry from those fearful they will be pushed aside under Republican rule.

“One way or another, we want everybody to be represented and the way the campaign was, it wasn’t feeling that everybody was being represented,” she said, adding that she was glad Pence came.

“From what I’ve heard, it sounded like it was fair and equitable. It was just a statement of ‘please represent everyone. We are a diverse country and we need to be inclusive,'” she said. “That’s what this country was founded on.”

Mark Kennedy is at http://twitter.com/KennedyTwits

Fifth Harmony’s Lauren Jauregui: ‘I am a bisexual Cuban-American woman’