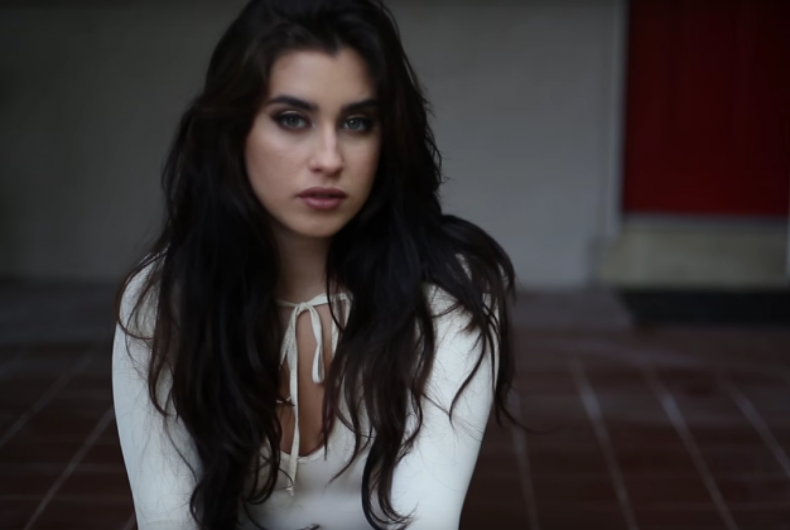 Fifth Harmony's Lauren Jauregui came out as bisexual in an open letter to Trump supporters.Photo: YouTube

Jauregui writes that the letter is addressed to Trump supporters who claim they are not racist, homophobic, sexist, and xenophobic.

“I am a bisexual Cuban-American woman and I am so proud of it. I am proud to be part of a community that only projects love and education and the support of one another,” she writes. “I am proud to be the granddaughter and daughter of immigrants who were brave enough to leave their homes and come to a whole new world with a different language and culture and immerse themselves fearlessly to start a better life for themselves and their families.”

In it, she rails against opposition to so called “political correctness” and calls out Christians who voted for Trump as being un-Christ-like.

“You chose hatred,” she says to the Christians. “Your heart chose to separate yourself as a superior when the only superior in existence in this entire universe is SO much greater than you.”

Thanks to the ignorance of Trump supporters and the president-elect’s ability to tap into their sense of superiority over others, she says, all the nation’s social progress will be destroyed.

“You have, with your pure ignorance and refusal to understand the way the government and the world works, allowed a power-hungry business tycoon to take over the United States of America,” Jauregui writes. “He became your champion, because he spoke to the parts of you that think you are superior to the rest of us.”

Sh goes on to acknowledge her own privilege as someone perceived to be white, and her commitment to supporter other women.

“I was born with a lighter complexion and green eyes (thanks genetics) so from that narrow-minded perspective, I’m white,” Jauregui explains. “I have experienced the privilege those genes have granted me, and I am grateful and will continue to speak on behalf of the women around the world and in our very own country who do not experience a fraction of that respect because of the color of their skin or what they choose to wear, or how their hair looks, or how much makeup they have on or any other absurdity that we women are reduced to.”

She ends her lengthy letter with a bit of advice for Trump supporters.

“If I could tell every Trump supporter two things, it would be to travel and read a history book,” Jauregui says.

Racial issues likely to come up at Sessions’ Senate hearing