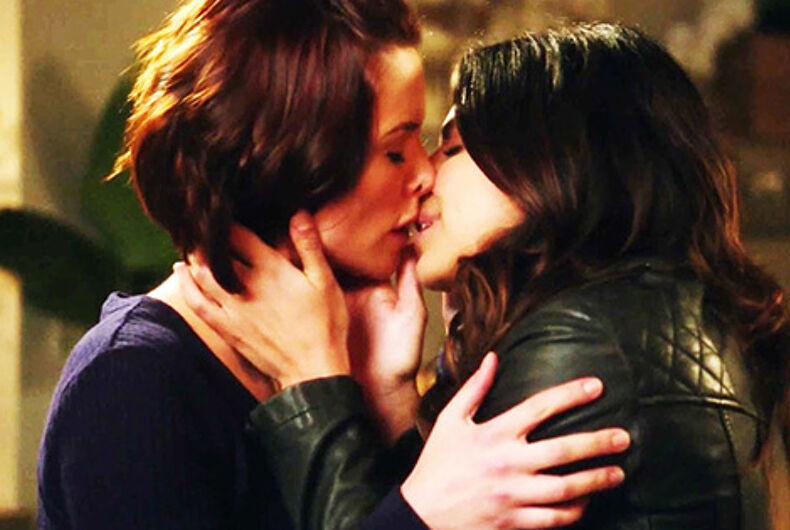 A Christian father of two girls is speaking out to admit he made a mistake in his now viral tweet about the TV series, “Supergirl,” in which he asked producers to “tone down the homosexual messages.”

@SuperGirlTheCW please tone down the homosexual messages. Used to watch this with my daughter's now I have to explain to a 7 and 10 y.o. thx

“I was a bit narrow-minded in my choice of words,” Taron Young told LGBTQ Nation in an exclusive phone interview. “Unaware, not understanding, that my choice of words, 1, could be taken as offensive, and 2, didn’t really explain my ultimate point. My ultimate point was about age appropriate content attached to something I thought was more ‘family-friendly’ than mature.”

Young wasn’t aware that this season, Supergirl’s sister Alex, played by Chyler Leigh, came out as lesbian, and is dating Maggie Sawyer, played by Floriana Lima, a relationship that was cheered by the show’s LGBTQ fans.

His first mistake, Young said, was in expressing himself; his second was who he tagged in his tweet: the fan base, not the official Twitter account of the CW show.

And that second mistake triggered an explosion among fans, who tweeted back to Young with advice, criticism and in some cases, outright anger.

What's so hard to explain? I'll do it for you: Sometimes two women like, like each other. There. Done. Easy.

what you actually mean is "how do I explain that my kids should hate people who love each other."

It's easy to explain to a child that two people love each other. It's hard to explain why you hate them for it.

Perhaps the best response, however, came from the fan account originally targeted by Young, a married salesman who revealed he voted for Obama twice, but Trump in 2016. @SuperGirlTheCW pinned this perfect response to the top of its page:

Good, explain to them that love is love and it's beautiful no matter where you find it and who you find it with. #Sanvers #Supergirl https://t.co/diRjuO0jxX

And to his credit, Young replied to this and each and every tweet, even as they grew in numbers, in the hundreds.

@SuperGirlTheCW thx. I know better now. Didn't dawn on me until civil tweets explained my mistake. The other 1000 tweets were pretty tough.

“I’d say out of the thousand tweets I got, and that I still get, seven guys direct-messaged me and said, they got where I was coming from, but they did explain to me a better way to get my point across, and also gave me words of encouragement.”

Young told LGBTQ Nation that the twitter storm didn’t motivate him to speak to his daughters, ages 7 and 10, about sexuality. But he did talk about it with his wife.

“We see it the same way, but her approach would have been totally different,” he said. “She picked up on my choice of words, instantly, whereas I was still in the dark. I was in the dark until members of the community shared with me my mistake.”

Young also called it a “mistake” to have tweeted the fan base, but he saw a silver lining: “In the long run, it was great for my education.”

“I deal with bigotry every day. I should have known better,” Young said, revealing he is African-American.

“Although the country has progressed a ton, there are still some pockets where we have more work to do,” said the construction industry salesman. “There are not a lot of guys who look like me who do what I do.”

Young said what he learned from this experience will be something he remembers when he feels it’s time to introduce his daughters to sexuality, but that in his family’s daily life the girls are already well aware that love is love.

“We have homosexual friends and family that are regularly around, regularly hanging out with me and our kids, so they understand that it’s natural for a woman and a woman, or a man and a man, to love each other.”

So why didn’t Young take down the tweet after getting hammered?  “I wanted to hear the raw truth,” he said, “so I could be a better messenger to my message.”